USC at Utah: 3 things to watch

USC travels to Salt Lake City on Thursday night for a Pac-12 clash with Utah at Rice-Eccles Stadium.

The Trojans and the Utes are both coming off of bye weeks, so both teams have had extra time to prepare. Of course, USC already has one conference loss after falling to Stanford while Utah was blown out by Arizona State and also fell to Utah State.

The Trojans haven't played in Salt Lake City in 95 years. Will this trip be a success?

Let's take a look at three things to watch in the clash between the Trojans and the Utes on Thursday evening. 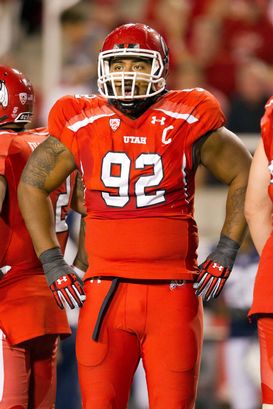 US PRESSWIREDL Star Lotulelei and the Utes defense will need to be at their best against USC.

1. Can the Utes' defense bounce back?: The last time Kyle Whittingham's team was in action, he saw his defense get shredded by Arizona State's up-tempo spread attack, as the Utes allowed 512 yards of offense in a 37-7 blowout loss. The Sun Devils were prolific through the air, and a lot of the damage was done off of the play-action pass. Trojans quarterback Matt Barkley has top receiving weapons in Robert Woods and Marqise Lee, so the Utes' secondary will definitely be challenged. It will be critical for the Trojans to establish their run game with Silas Redd and Curtis McNeal so they can set up play action and keep balance offensively. 'SC has struggled in the run game and pass protection when center Khaled Holmes has been injured, and they also seem to still miss left tackle Ryan Kalil, who was drafted by the Minnesota Vikings last April. Kiffin is hopeful that Holmes plays Thursday, and it will help the Trojans' cause if the Utes are without defensive end Joe Kruger. Whittingham has not said if he'd be ready for this game. We do know, however, that safety Eric Rowe will be back. If Kruger is unable to go, the Utes still have stud tackle Star Lotulelei, who has four tackles for loss, two forced fumbles and a sack this fall. Whoever is at center for the Trojans will have a tough matchup.

2. Will the Utes be able to move the football?: The Utes' passing offense is last in the Pac-12 and the team is second-to-last in scoring offense, averaging just 17 points per game in its last three contests. And it starts up front, where freshmen right guard Siaosi Aiono and right tackle Jeremiah Poutasi will be starting along the offensive line against the Trojans. Although the 'SC defensive line is one of the weak links on Lane Kiffin's squad, it shouldn't get exposed against an overmatched Utes offensive line in this one. If the Utes want to keep it close as they did last year in the game at the Coliseum, the O-Line has to play its best game of the season.

3. Barkley vs. Hays: There's no question that Matt Barkley has some of the best weapons of any offense in the country. If he has time to throw, Robert Woods and Marqise Lee — who have combined for 65 receptions this fall — will be awfully tough to stop. And if the Trojans offensive line is opening up holes, Silas Redd and Curtis McNeal will get their share of yards. Even if the offense is held in check, Utes quarterback Jon Hays will need to make some plays through the air against a tough Trojans secondary led by safety T.J. McDonald. The senior quarterback, who is completing about 60 percent of his passes, will need to play a turnover-free game. He has thrown just one interception in the two games he has started. He'll also need help from the ground game, which has struggled since star running back John White injured his ankle. Utah is 9-0 when White rushes for 100-plus yards, so he's clearly a large part of the team's offense. He struggled against the Sun Devils, though, fumbling twice and recording just 18 total yards.