USC kicks off spring practice on Wednesday in preparation for its spring game on Saturday, April 14.

The Trojans return seventeen starters (nine on offense and eight on defense) from a team that was arguably playing better than any team outside of LSU and Alabama to close the 2011 regular season.

With its two-year postseason ban now over, 'SC is primed for a return to the national stage. And Lane Kiffin's squad could be ready for a national championship run.

Let's take a look at some of the key storylines during USC's early preparation for the 2012 season.

The biggest strength of the team is Kiffin's ability to relate to his players -- something he did so well for the last two years in guiding his squad through two extremely difficult years when every single member of the team knew that there was no postseason on the horizon. And the defensive players fully buying into Monte Kiffin's scheme in Year 2 did wonders for that side of the ball in 2011.

But for the first time in the Kiffin regime, staff turnover has caused a hiccup, especially because of the departures coming so close to spring drills. 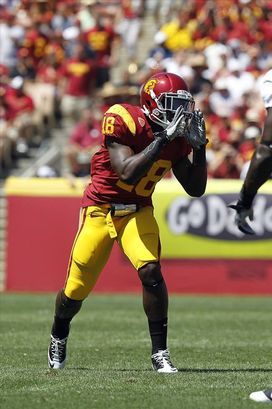 ICONDion Bailey and the Trojans are getting more comfortable under DC Monte Kiffin.

Former North Dakota State defensive coordinator Scottie Hazelton will take over as linebackers coach after winning the FCS national championship last year. Hazelton will inherit very good talent at the linebacking corps, so his transition to big-time college football will be aided. It is essential that he gets a feel for his players' personalities right away, starting with his three returning starters: Dion Bailey, Lamar Dawson and Hayes Pullard.

Kiffin also finally brought in a secondary coach after Willie Mack Garza left last fall because of NCAA issues. The former Oakland Raiders and Tennessee Vols head coach was able to land Marvin Sanders after he had become Carl Pelini's defensive coordinator at FAU. Sanders, a former Nebraska secondary coach, has helped groom a lot of future NFL draft picks in Lincoln and was part of some Cornhusker coaching staffs that led stout Blackshirt defenses. While 'SC is young in the secondary, it is a very talented defensive backfield.

The one hire that created quite a stir was Tee Martin, who left Kentucky to take over as the receivers coach. The former Tennessee quarterback is known for his recruiting prowess, which is the last thing rival Pac-12 programs want to hear. He also just so happens to inherit All-Americans Robert Woods and Marqise Lee as well as former five-star recruit George Farmer. Just filthy talent at the receiver position.

T.J. McDonald will start at one safety spot, but Jawanza Starling will have to fend off some tough competition to keep his spot in the lineup. Starling bounced back from a tough 2010 last season, but Drew McAllister and Demetrius Wright should push him this offseason. And the X-factor is Florida transfer Josh Shaw, who is talented enough to start on most any team in the nation. But it has yet to be determined whether he'll be eligible in 2012 and if he is better suited as a corner or safety.

At cornerback, two-year starter Nickell Robey is penciled in at one spot. But Isiah Wiley, Tony Burnett and senior Brian Baucham are among those who will battle for that other job, which is a concern. Keep an eye on redshirt freshman Ryan Henderson, who was one of the most athletic corners in the Class of 2011. Shaw could also enter the mix here as well as Anthony Brown, who is expected back from a season-ending injury at some point. Certainly, new DBs coach Marvin Sanders will have his work cut out for him.

Perhaps the biggest chore for this staff is replacing star left tackle Matt Kalil. Aundrey Walker will start the spring at right tackle, with Kevin Graf slotted in as Kalil's replacement as of now. But Walker could get the opportunity to steal the left-side job from Graf after Lane Kiffin said he dropped upwards of 60 pounds. If Walker's athleticism and quickness shine through after his weight loss, protecting quarterback Matt Barkley's blind side could be his full-time job by fall.

Finally, the defensive line loses three starters, including the Pac-12's leader in sacks in Nick Perry. Wes Horton and Devon Kennard will be the ends, but there's not a lot of depth behind them. Tackle is another area of concern because of a lack of quality bodies, so a lot will fall on the shoulders of George Uko for a pass-rushing presence with nose guard J.R. Tavai a non-factor. Reserves Kevin Greene, Antwaun Woods, Christian Heyward and Greg Townsend Jr. will try to make an impression this spring.

The leader of the pack

I argued in my final NFP Heisman Watch of the season that Matt Barkley deserved a spot in New York at the Heisman Trophy ceremony after his fantastic junior campaign. He wasn’t the reason that ‘SC lost to Stanford, and his only “off” game was the road loss at Arizona State. While the Trojans weren't eligible for the postseason because of NCAA sanctions, Barkley led a BCS-level squad last fall. He now returns for a final season in Los Angeles after bypassing the NFL Draft, and he enters spring drills after completing 69.1 percent of his throws for 3,528 yards and 39 touchdowns against 7 interceptions in 2011. He’ll have the best receiver combination in the nation in Robert Woods and Marquise Lee, and he's one of the biggest reasons why 'SC will be a preseason Top 5 team in August.