For good reason, USC is a popular choice to make it to Miami and battle for the BCS national title in January.

Trojans Heisman Trophy-contending quarterback Matt Barkley has the best receiver combo in the game in Robert Woods and Marqise Lee, while Penn State transfer Silas Redd has joined Curtis McNeal to form a Thunder and Lightning rushing combo that is the envy of nearly every major program in America. 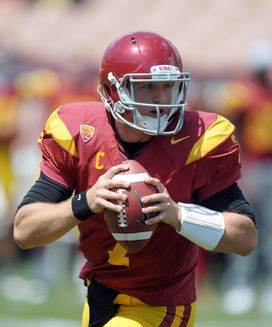 US PRESSWIREUSC will always have a chance with Matt Barkley under center.

There aren't many offenses that can work around having an inexperienced left tackle replace a Top 10 NFL Draft pick. But the offense at 'SC is one such unit.

However, there are concerns on Lane Kiffin's 2012 squad.

While there aren't many teams with a better crop of 22 starters than 'SC, coordinator Monte Kiffin's defense still needs to take one more step to be championship-worthy — specifically its defensive line, a group that is feeling the effects of the NCAA-mandated 75-scholarship limit.

The front four should concern Trojan fans after losing Nick Perry and DaJohn Harris from last season's squad. Veteran Devon Kennard went down with injury as well as true freshman DeVante Wilson, though Wes Horton and J.R. Tavai do return. But can sophomore George Uko and freshman Leonard Williams hold up and produce inside? With a limited number of proven veterans and healthy bodies, is there enough depth up front? Especially when the team plays a high-octane offense such as Oregon and a physical, run-first squad such as Stanford. It's scary to think that after Uko and Williams, the remaining three defensive tackles are all freshmen.

In terms of the schedule, the Trojans get Oregon and Notre Dame at home, but they do have an early-season test on The Farm against Stanford. And there is the prospective Pac-12 title game, which could be a rematch against the Ducks.

Finishing games is huge for a team that has depth issues. Just think back to so many leads this team has had under Kiffin, only to see the squad fall short. While Kiffin has done a tremendous job maneuvering around scholarship limitations, lack of depth could be an issue late in games.

No matter what bowl the Trojans play in, fans should be ecstatic that there is even a postseason to watch after two years of being sidelined by NCAA sanctions. But there's no question that a 12th national title could come to Los Angeles if the elder Kiffin can work his defensive magic and get enough production from his talented yet depleted front four.