USC has a lot going against it in the team's quest to hand Oregon its first loss of the season on Saturday night at the Los Angeles Coliseum.

Lane Kiffin's squad is 110th in third-down offense, which was a major issue when the Trojans were just 1 of 13 against Stanford. Five turnovers doomed the Trojans when they fell last week to Arizona. And they're last in the nation in penalties and penalty yardage.

Those are deficiencies that will be tough to overcome against one of the top teams in the nation, an Oregon team that has blown through its schedule up to this point.

But the Trojans still possess the most potent pass-catching duo in the nation in Robert Woods, who has 53 catches for 585 yards and nine touchdowns, and Marqise Lee, who leads the Pac-12 in receiving yards (1,129), catches (76) and touchdowns (10).

And that's enough to keep Ducks defensive coordinator Nick Aliotti up at night. 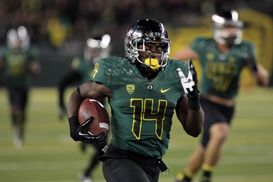 US PRESSWIREDucks CB Ifo Ekpre-Olomu will be tested by USC's dynamic receivers.

Despite the fact that Oregon has two of the best cornerbacks in the Pac-12, sophomores Terrance Mitchell and Ifo Ekpre-Olomu, Woods and Lee will be on the spot after combining for 240 yards and three touchdowns on 15 catches in USC's 38-35 upset of the Ducks last year at Autzen Stadium. And there's no question that the Ducks saw plenty of Lee on tape this week after his Pac-12 record-setting performance of 345 receiving yards last week in the loss to Arizona.

Mitchell and Ekpre-Olomu, who is a semifinalist for the Jim Thorpe Award, have yet to really be tested this fall, certainly not by anyone of the caliber of the Trojans' star receivers. Expect safety help for the corners, especially if they are rattled early on. And always look for a variety of blitzes from Aliotti to try to thwart the Trojans passing attack, led by quarterback Matt Barkley, who would love to notch a huge win over the Ducks in one of his last big games at the Coliseum. Sound tackling technique will also be needed from Aliotti's defenders.

The good news for the Ducks is that the Trojans rely on a lot of short passes to move the football, so expect their linebackers like Michael Clay to be physical and try to rough up Woods and Lee when they come across the middle. And keeping the star receivers in front of the defense will be crucial for a unit that seems to have an ever-growing quiet confidence about it as it continues to grow up.

Oregon is a better team than USC, make no mistake. But the Trojans receivers are so explosive that they can be the No. 1 reason why 'SC pulls an upset on Saturday night.