Versatility to be a staple of Iowa's offense

One of the most-used words to describe the Iowa football program under Kirk Ferentz has been "continuity," particularly regarding his staff.

But the Hawkeyes head coach will have new coordinators on both sides of the ball this fall, as Greg Davis will lead the offense with Ken O'Keefe now with the NFL's Miami Dolphins, and former defensive backs coach Phil Parker will be calling the defensive plays after the retirement of Norm Parker (no relation). It will be the first time the Hawkeyes enter a season with two new coordinators since the head coach's arrival in Iowa City.

But a shakeup could be just what this Iowa program needed after experiencing back-to-back .500 finishes in Big Ten play. And in advance of spring practice, Ferentz said the new additions will make things "fun" and "invigorating."

Defensively, expect a very similar-looking unit as in past seasons. Parker likely won't get too blitz-crazy and the 2-deep zone coverage will be prevalent. Like always, the team's fortunes will be determined by the play of the front four. And they'll have one of the younger defensive lines in the country. 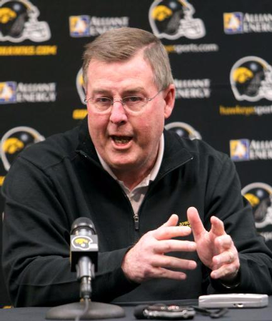 Greg Davis will give the Iowa offense a bit of a different look in 2012.

Offensively, however, the Hawkeyes will look much different than in years past under Davis, the veteran OC who was Texas head coach Mack Brown's righthand man in Austin.

Although Longhorn fans often derided Davis for his use of the bubble screen, he has proven that he could successfully build offenses around a wide variety of players. Major Applewhite became known for his gritty heroics after beating out the more heralded Chris Simms for the starting quarterback job, and Colt McCoy played to a Heisman Trophy level as well. When Vince Young was in Austin, Davis essentially turned the offense over to VY and utilized his athleticism in the spread option attack. As a quarterbacks coach, Davis helped develop the games of Applewhite, Young and McCoy. And while the running game began to falter in his latter years, he found success in the past with power backs like Cedric Benson.

We all know that the Hawkeyes love to run the football. And that will still be a top priority. However, with the Big Ten's second-leading rusher in 2011, Marcus Coker, transferring to Stony Brook, Iowa will need to replace his 1,384 yards and 15 touchdowns on the ground. Jordan Canzeri, who likely would have had the first shot at emerging as the lead back, suffered a torn ACL and will likely miss the 2012 season. And Class of 2012 product Greg Garmon ran into some off-the-field trouble recently. Could Damon Bullock, De'Andre Johnson, Barkley Hill or Garmon emerge from the pack and run with the starting job? It's possible. But I'd expect a rotation to be prevalent, at least until the team enters conference play. The question is whether enough capable backs can emerge to at least give the Hawkeyes some semblance of Big Ten-quality depth, especially against the league's better run defenses.

No matter who is carrying the football, expect Davis to put the game into the hands of quarterback James Vandenberg, who finished third in the Big Ten last season with 3,022 passing yards. I can see Davis utilizing the short-passing game to serve as a de facto run game, at least early in the season. Davis worked well with different types of quarterbacks and running backs in Austin, so his play-calling is versatile. And, yes, expect him to work in the wide-receiver screen game. He never has had a problem utilizing an east to west offense at times. The veteran OC even experimented with an up-tempo attack during spring drills, which is another wrinkle that could give opposing Big Ten defenses fits.

With Marvin McNutt departing, Vandenberg will be looking to establish rapport with some new weapons. Keenan Davis could be ready to emerge as the new No. 1 receiver because he has good size and showed potential last season. But he struggled with dropped passes. Kevonte Martin-Manley was solid in the slot early in the year but seemed to go AWOL. Tight end C.J. Fiedorowicz could be a bit of an X-factor in this offense. I expect Davis to really utilize Fiedorowicz, perhaps giving the Hawkeyes production at the position that they were used to when the likes of Allen Reisner and Tony Moeaki were on campus.

There's no question that running the football and playing sound defense will be priorities this fall in Iowa City. But do expect Davis to open up this offense and utilize the unit's biggest strength: Vandenberg's right arm.