The Hokies will be playing their first conference game of the season, while the Yellow Jackets are unbeaten in two league contests.

Let's take a look at three things to watch in the clash between Frank Beamer's Hokies and Paul Johnson's Yellow Jackets on Thursday evening.

1. More efficiency and production from Thomas: Logan Thomas has continued to struggle with his accuracy, as he has failed to complete at least 60 percent of his throws in a game this season, which makes it 10 straight contests going back to last season. Protecting the football has also remained an issue for the big dual-threat signal-caller, as he has thrown six interceptions in 2013. However, as was the case last season, just how much help is Thomas getting around him? While the line play has improved, the Hokies needed three overtimes to beat Marshall 29-21 last week, and dropped passes remain a concern for the team's receiving corps. They can't afford such mistakes against a GT secondary that is improved from last year under new coordinator Ted Roof. The Jackets are No. 21 nationally against the pass, and they were able to keep Duke and North Carolina in check through the air. Senior cornerbacks Jamea Thomas and Louis Young are two of the best in the ACC, but safeties Jamal Golden and Chris Milton are banged-up. Keep an eye on Hokies running back Chris Mangus, who could be emerging as a nice safety valve for Thomas out of the backfield. 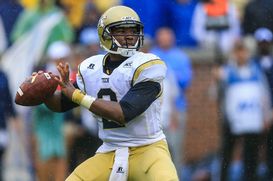 US PRESSWIREVad Lee has recorded 10 touchdowns on the year.

2. Stopping the Ramblin' Wreck Express: Bud Foster's defense will try to limit the big plays typically delivered in GT's option offense, and the good news for the Hokies is that they have had success in five meetings with Johnson's Jackets. In those games, they have allowed 20.8 points and 360.2 yards per game, winning four of those contests. The Jackets should be able to move the football, but the key for VT is keeping the GT offense on the sideline as much as possible — and that falls on Thomas and the Hokies' offense — as well as out of the end zone. The Hokies are allowing just 2.63 yards per carry, and the experienced front seven has seen this offense in the past, so it's nothing new. GT, meanwhile, averages 345 yards per game on the ground behind quarterback Vad Lee, B-Back David Sims and A-Back Robert Godhigh, and they've been very good on third down conversions. The Hokies will look to limit the yards on the early downs to put the Jackets in more potential passing situations.

3. Can GT throw, and can VT run?: The Yellow Jackets can do a lot more than run, which has not always been the case under Johnson in the past. Lee is completing over 56 percent of his passes, and seven of his throws have resulted in touchdowns. Not only is DeAndre Smelter a weapon on the outside, but GT's running backs are pass-catching threats as well. Hokies end J.R. Collins, who has 4.5 sacks, and the front seven will have a chance to make plays rushing the passer only if GT is in third-down passing situations. Meanwhile, Virginia Tech may not have running back Trey Edmunds, who has been dealing with a hip injury. J.C. Coleman does return from an ankle injury, though, and the team could continue to use the read-option with Thomas that we saw last week against the Thundering Herd. The Jackets are giving up just over 107 yards per game on the ground, so running room will be tough to find for an offense that has struggled to get traction in that area.

Even if Virginia Tech’s defense contains the Georgia Tech offensive attack for the most part, can the VT offense score enough points on the road to produce the upset?