Vrabel settling in well in his Ohio State return

The jury is still out on Ohio State interim head coach Luke Fickell as he begins his first -- and possibly only -- season as the leader of the Buckeyes. His success will certainly be measured by wins and losses, and not just the way he handles the trying circumstances in Columbus.

But early indications are that Fickell made a smart move in bringing in former Buckeyes player and close friend Mike Vrabel, who was hired to be the team's new linebackers coach. 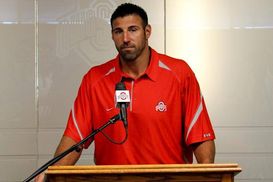 Mike Vrabel is settling into his new role as a college assistant.

According to the Columbus Dispatch, Vrabel has been very vocal so far this fall while directing his group of players -- the same group that Fickell used to coach.

On the playing field in the NFL last season, on the practice field directing young players the next.

“He fit in just fine,” the 37-year-old Fickell said. “You could see that the guys take to him; the coaches have taken to him.

“But again, we’re not trying to focus on any one person, any one player, any one coach…We’re just going to continue to talk about the team.”

The 14-year NFL veteran has never coached at the college level before, but his NFL experience can only be considered a plus, especially considering he has three Super Bowl rings to show to his players.