The Mike Leach era at Washington State kicks off Thursday night as the former Texas Tech head coach heads home to Provo to take on BYU in an intriguing battle of the Cougars.

Leach will try to take Wazzu bowling in his first season in Pullman, while Bronco Mendenhall looks to continue to make BYU a national program again in the school's second year as an Independent after going 10-3 with a victory over Tulsa in the Armed Forces Bowl last year.

Let's take a look at three things to watch in the clash between Cougars on Thursday evening.

Click here for South Carolina at Vanderbilt: 3 things to watch 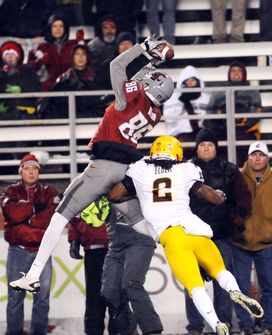 US PRESSWIREMarquess Wilson is primed for an enormous season under Mike Leach.

1. The cupboard wasn't left bare: Leach inherited some quality talent, especially on offense, from former Wazzu head coach Paul Wulff. And with Leach's offensive prowess, expect a ton of points to be scored from this offense no matter who is starting at quarterback. Jeff Tuel and Connor Halliday are more than capable of running Leach's prolific Air Raid offense, so there are high expectations from the Wazzu fan base despite the 4-8 season in 2011. Tuel threw for 2,780 yards with 18 touchdowns as a sophomore but missed most of last season with a shoulder injury. Halliday was very solid as his replacement before being sidelined by a lacerated liver last fall. Meanwhile, receiver Marquess Wilson, who caught 82 passes for nearly 1,400 yards and 12 touchdowns last year, is one of the best offensive players Leach will have had a chance to coach by the end of his career. If he can become a better blocker, he will become Leach's new Michael Crabtree. Wilson leads a deep receiver corps that will have a chance to shine in this scheme.

2. Nelson is back for one more run: BYU quarterback Riley Nelson is the starter once again after taking over last fall for Jake Heaps, who has since transferred to Kansas. Nelson completed over 57 percent of his passes for over 1,700 yards and 19 touchdowns last fall. And he has receiver Cody Hoffman back after his 61-reception, 943-yard and 10-touchdown campaign. While Wazzu won't be known for its defense, the front will give the BYU offense multiple looks, and expect a healthy dose of blitzes. And junior cornerbacks Damante Horton and Nolen Washington are experienced. So Nelson will have to be ready for both zone and man coverages, and it's a big spot for him to be in — especially knowing that he won't have to look over to the sideline and wonder if Heaps will be coming into the game if he struggles. A nice stable of running backs will be Nelson's best friend this season and can help open up the passing attack.

3. The Van Noy factor: Linebacker is the strength of BYU's defense, and no one is better than Kyle Van Noy, who will likely be one of the better linebackers in the team's history. He recorded five tackles for loss in the team's bowl win over Tulsa, and along with Brandon Ogletree will give opposing offensive coordinators fits. Last season, the 6-3, 235-pounder led the team in unassisted tackles (50), tackles for loss (15), sacks (7), interceptions (3) and quarterback hurries (10). He also forced three fumbles. While the secondary isn't the fastest, the defenders are technically sound. But Van Noy and the linebacker corps will be crucial in containing some of the shorter and quicker passes that will leave the hands of the Wazzu signal-caller.