1. Virginia Tech: Clemson defeated Virginia Tech twice last season, so I realize that putting Dabo Swinney’s team behind Frank Beamer's squad will be unpopular for Tiger fans. But the Hokies remain one of my BCS darkhorses because of their favorable schedule, although they do have to travel to Death Valley to take on Clemson. Can Virginia Tech continue its run of winning at least 10 games in eight consecutive seasons? Bud Foster’s defense may have to carry the load early in the season until the offense gels, but quarterback Logan Thomas, receiver Marcus Davis and running back Michael Holmes should be productive as long as replacing four offensive linemen isn't too daunting of a challenge. 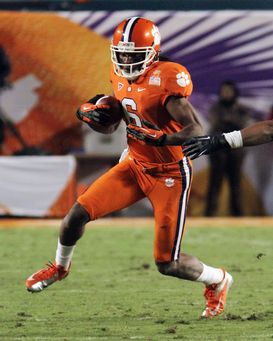 US PRESSWIREDeAndre Hopkins will be the top target for Tajh Boyd in the opener against Auburn.

2. Clemson: Quarterback Tajh Boyd will have to deal with explosive Sammy Watkins being on the sideline in the tough opener against Auburn, but he'll still have DeAndre Hopkins to make plays. Expect the offense to continue to be prolific under second-year coordinator Chad Morris. However, the defense needs to improve under new coordinator Brent Venables after its embarrassing Orange Bowl performance against West Virginia.

3. Florida State: The Seminoles may be ready to live up to the lofty expectations placed upon them last year, as Jimbo Fisher’s squad is even deeper on defense — especially along the line — with another loaded recruiting class. Veteran quarterback EJ Manuel is poised for a big season, but the ‘Noles will only go as far as their running game will take them. Early enrollee Mario Pender made a strong impression this spring but will be forced to redshirt after having groin surgery. The offensive line has seemingly come together very well, but can it hold up for an entire season? If the 'Noles can run the football, they can compete for a national title.

4. Georgia Tech: Paul Johnson could be poised to have his Yellow Jackets re-assert themselves as ACC contenders, as the offense will once again be a juggernaut on the ground behind a seasoned offensive line and quarterback Tevin Washington. A good portion of the roster returns from last season, but Al Groh’s defense will need to continue to make strides if this team is going to contend for a Coastal division crown. Keep an eye on inside linebacker Jabari Hunt-Days, who could be primed for a breakout year.

5. N.C. State: Head coach Tom O’Brien navigated his team through an inconsistent season in 2011 but finished strong, ending the year on a three-game roll including wins over Clemson and a bowl victory over Louisville. Quarterback Mike Glennon cut down on his interceptions late in the year, but the Wolfpack need a lead back to emerge to improve on a rushing attack that ranked No. 109 in the country last fall. An experienced offensive line will help. Meanwhile, All-America cornerback David Amerson leads a defense that relies on sacks and turnovers. But replacing all three linebackers is a chore.

6. Virginia: Mike London had the Cavaliers vying for a division title deep into the season last fall, so the expectations are high as the head coach enters his third year in Charlottesville. And he has continued to make a splash this offseason on the recruiting trail. The Hoos, however, have to replace seven starters on defense, and the real concern is a secondary that will need to lean on true sophomore Demetrious Nicholson. Offensively, whoever starts at quarterback — incumbent Michael Rocco or Alabama transfer Phillip Sims — needs to find his talented receivers on a consistent basis.

7. North Carolina: Some quality replacements must emerge on the defensive side of the ball for new head coach Larry Fedora, and it will be interesting to see the Tar Heels running a 4-2-5 scheme. Offensively, four starters return up front, and quarterback Bryn Renner is healthy after playing well with bone spurs in his ankle last season. He looked good running the new offensive scheme this offseason. However, how motivated will UNC be knowing that a postseason ban is in place? If there is one head coach who can lead a team with its back against the wall, it's Fedora.

8. Wake Forest: Jim Grobe, one of the most underrated head coaches in the nation, had the Demon Deacons in position to claim the Atlantic division crown last season. And quarterback Tanner Price continues to improve each campaign. However, four starters on the offensive line must be replaced, and running back Josh Harris must stay healthy. Replacing stud receiver Chris Givens will be difficult. But Wake Forest is always a tough out, and the Demon Deacons are good enough to once again go bowling.

9. Miami: Al Golden was able to bring in another standout recruiting class this past February, but the Hurricanes still await likely NCAA sanctions. So it's entirely possible that the 'Canes will self-impose another bowl ban if the season gets away from them. Early departures for the NFL Draft certainly will hurt the team’s fortunes in 2012, and replacing top playmakers on offense — including leading rusher Lamar Miller — will be difficult. But quarterback Stephen Morris impressed this fall after sitting out this spring with a back injury.

10. Maryland: Randy Edsall couldn’t have had a worse debut season in College Park just a year removed from taking UConn to a BCS bowl game. But hiring Mike Locksley as offensive coordinator should help both on the field and on the recruiting front. The major question is whether true freshman Perry Hills can make this offense at least serviceable following the loss of C.J. Brown to a season-ending knee injury. If the Terps can get to 5 wins, fans should be happy as long as Edsall's communication and leadership have improved.

11. Duke: David Cutcliffe has yet to elevate the Blue Devils program to minor bowl status, and it will be up to second-year coordinator Jim Knowles to get the defense to make strides in the 4-2-5 scheme. Top safety Matt Daniels is gone, but the secondary is the strength of the defense. However, can the front six hold up against the run and deliver a pass rush? Veteran quarterback Sean Renfree could lead a prolific offense if he limits his turnovers.

12. Boston College: Doug Martin is the team’s fifth offensive coordinator in as many seasons, and it won’t be easy moving the football with running back Montel Harris dismissed and landing at Temple. However, the health of Harris was a question mark after he re-injured his knee on the first day of spring drills anyway. Martin wants a more physical rushing attack along with some up-tempo no-huddle looks. Quarterback Chase Rettig looked improved this spring, but it’s near impossible to replace the leadership and outstanding play of Luke Kuechly on the defensive side of the ball.