Today marks the last Saturday of the summer where we will wake up to having no college football to watch. So mow that lawn, get that haircut or take the wife/girlfriend out to breakfast for the final time — at least for a long while. Because starting next week the 2012 season will be in full swing, with the campaign kicking off on Thursday night.

Let's take a look at some teams that should be on upset alert in Week 1. While I'm not projecting upsets, I've merely selected some games that could be close for at least a half — or even longer.

And, because this is college football, I wouldn't be surprised if one or two of these 'dogs did pull the upset.

South Carolina at Vanderbilt: James Franklin's Commodores pose a tough opening test for Steve Spurrier's Gamecocks, who have designs on making it back to Atlanta for the SEC title game. Expect this game to be close at least for a half, but it will be tough for Vandy's linebacker corps to contain stud running back Marcus Lattimore, who is healthy once again, for an entire game. South Carolina is currently a 7-point favorite on the road, and this just feels like a 20-16 type of contest. 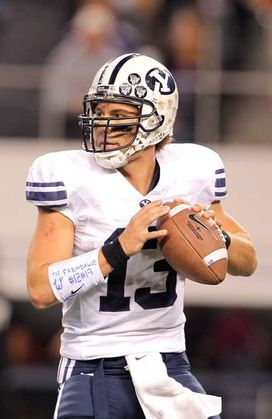 Washington State at Brigham Young: Mike Leach gets a chance to immediately put his stamp on the Wazzu program in a battle of the Cougars. Meanwhile, BYU quarterback Riley Nelson once again is the full-time starting quarterback with Jake Heaps onto Kansas, and he has a solid running game and offensive line to help him out. Former Wazzu head coach Paul Wulff didn't leave the cupboard bare in Pullman, so I expect Leach to have a real shot at getting 6 wins in Year One. It just might be too much to ask to hang around and spring an upset in Provo against a stout defense. However, I think BYU being 13.5-point favorites is a bit of a reach.

Texas A&M vs. Louisiana Tech (in Shreveport): The Aggies will be breaking in a new offensive system directed by Kevin Sumlin, who has overseen prolific offenses throughout his coaching career. But Louisiana Tech is a BCS buster to watch after having a strong 2011. Sonny Dykes and the Bulldogs beat Ole Miss and fell to Mississippi State in overtime last fall before losing by just a touchdown to TCU in their bowl game. So they have the pieces to spring an upset. And A&M will be breaking in new quarterback Johnny Manziel, so this game should be close.

Boise State at Michigan State: The Broncos lost so much quality talent from their 2011 squad, including Kellen Moore, one of the best quarterbacks the college game has ever seen. Moore, along with six other Bronco players selected in this past April's draft, have moved onto the NFL. Joe Southwick now steps into the starting role at QB after having served as a backup for two seasons. As long as he keeps turnovers to a minimum, this offense should be solid. And the player development and coaching across the entire staff has been top-notch during Chris Petersen's tenure. Meanwhile, Michigan State is the most athletic team in the Big Ten, and many around the program believe that new quarterback Andrew Maxwell is the real deal.