With the 2012 campaign officially kicking off on Thursday night, we continue to take a look at some teams that should be on upset alert in Week 1. While I'm not projecting upsets, I've merely selected some games that could be close for at least a half — or even longer.

And, because this is college football, I wouldn't be surprised if one or two of these 'dogs did pull the upset.

Take a look at Part 1, which ran on Saturday.

Ohio at Penn State: I wrote this past summer that the Bobcats could be a potential BCS buster under veteran head coach Frank Solich. They'll have a chance to prove their worth when they travel to State College to take on a Penn State squad that will be breaking in a new offense under first-year head coach Bill O'Brien. Ohio will likely end up as the best team in the MAC with dual-threat quarterback Tyler Tettleton leading a very strong offense. And its defense is strong as well, particularly up front and in the secondary. Will we see the effects of Penn State's initial defections in Week 1? 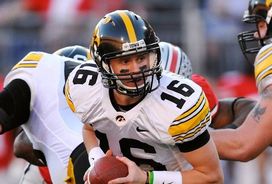 With its run game in shambles, Iowa may lean on QB James Vandenberg early in the season.

Iowa vs. Northern Illinois (Chicago): The Hawkeyes will be breaking in new coordinators on both sides of the ball, though Phil Parker is no stranger to Iowa City and Greg Davis was the longtime OC at Texas. This is an intriguing Big Ten-MAC matchup at Soldier Field because the Huskies won't have to face a high-powered offense as they did last year against Wisconsin at the NFL's home of the Chicago Bears. And the strength of this season's squad is actually its defense under second-year head coach Dave Doeren, the former Wisconsin DC. Expect Hawkeyes quarterback James Vandenberg to get plenty of opportunities to throw the football as the Hawkeyes sort through their messy backfield.

Michigan vs. Alabama (Arlington, TX): While I ultimately think Alabama will physically wear down the Wolverines over the course of four quarters, it is a little surprising that the Crimson Tide are 12.5-point favorites. If Brady Hoke's squad has any chance against the defending BCS national champions, this must be a Denard Robinson game. The senior dual-threat signal-caller is unlike any QB the Tide have faced since probably Cam Newton, and "Shoelace" will seem even faster on the dome's turf. But we know that Nick Saban never rebuilds. He reloads. So this defense, while breaking in a lot of new starters, will be incredibly physical. And offensively 'Bama will get better production from the receiving corps in 2012.

SMU at Baylor: The Bears begin the post-RG3 era in Waco, but Art Briles will continue to get production at quarterback with Nick Florence, who started when Griffin missed time earlier in his career with a knee injury. Meanwhile, June Jones and the Mustangs will be led by Texas transfer Garrett Gilbert, who struggled with turnovers running the offense at Texas. But the former five-star recruit will have a chance to start anew, and he'll have a strong running game led by Zach Line, who rushed for over 1,200 yards and 17 scores in 2011, to help him out. I don't think SMU has enough material up front on defense to cause any problems for this Baylor offense, but it's a game to be wary of if you are a Bears fan.