The College Football Playoff selection committee will unveil its second Top 25 rankings on Tuesday night, and there’s a chance that we won’t see a non-Power Five team in the mix.

East Carolina looked lost in a road setback at Temple, meaning things have opened up for Marshall to claim the Group of Five’s ‘New Year’s Six’ bowl slot. But the Thundering Herd may not even show up in this week’s standings, and the committee won’t let us know where any team stands outside of those Top 25 squads.

As we close the book on Week 10 and look ahead to Week 11, let's take a look at how the new College Football Playoff could look in its first season as well as how the rest of the postseason could shake out in my latest bowl projections.

Below is how I slotted all of the teams for each and every bowl game. Yes, all 39 of them.

And, as always, these projections are subject to change — especially because it's still not entirely clear how the College Football Playoff will ultimately come together and it's common for some conferences to not always be able to fill all of their bowl tie-ins.

* Replacement team for a conference that cannot fill its bowl slot. 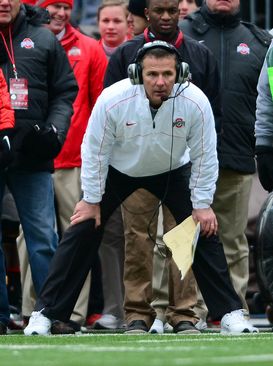 US PRESSWIREUrban Meyer and the Buckeyes could be headed to a 'New Year's Six' game.