What else could be in store on the thirteenth weekend of the season? Let's take a look at some players that will be vital to the success of their teams on Saturday. 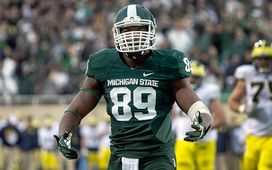 Shilique Calhoun is just one sack away from matching his total from last season.

Michigan State DE Shilique Calhoun: The Spartan defender will get to face Rutgers, which is about a 30-minute drive from where he grew up. The New Jersey native will square off against the Big Ten newcomers one season removed from a 2013 campaign in which he recorded three touchdowns and 7.5 sacks en route to being selected as a second-team All American. This season, however, the junior pass rusher is having what some NFL Draft analysts believe is a bit of a down year. However, even though he may not have had the highlight-reel plays, he's just one sack away from matching his takedown total from last year. And he just may be playing as well as he was in 2013 considering the Spartans lost so much defensive talent. The 6-5, 256-pounder will be extra motivated this week because he had a scholarship to Rutgers but chose to attend school in East Lansing instead, and it is unlikely that he will get to play the Scarlet Knights after this year. MSU does travel to New Jersey next season, but Calhoun is one of the Big Ten's top NFL prospects. He is likely going to be playing his last game at Spartan Stadium on Saturday, but expect a big effort from a defense that held Maryland to a mere six rushing yards in last week's 37-15 win.

USC QB Cody Kessler: The Trojans go on the road to battle UCLA in the best game of the weekend. Not only is this a big in-state rivalry game, but it's a Pac-12 South division contest that has major implications. A win would give 'SC a 7-2 conference mark and eliminate Utah and UCLA from the race. But the Bruins control their own destiny because they have the head-to-head tiebreaker against both Arizona and Arizona State. Kessler may be having the quietest best season of any USC quarterback in recent memory, as he's tossed 29 touchdowns against just three interceptions and nearly 3,000 yards. He's even played well in the team's losses. Kessler will need a big day Saturday, especially if Brett Hundley and the Bruins have a big day offensively.

Tennessee QB Joshua Dobbs: Butch Jones has found his quarterback. Most fans of the Vols were waiting for Dobbs to break out, and he's done just that since taking over starting duties. The signal-caller, who reminds me of a young Brett Hundley, is coming off of a strong performance in which he threw three touchdown passes and ran for a fourth score in a 50-16 win last week over Kentucky, which was the Vols' 29th win in their last 30 meetings against UK. Tennessee has scored 95 points in Dobbs' two starts since Justin Worley tore the labrum in his throwing shoulder and Nathan Peterman was ineffective. Dobbs' strong start against the Wildcats came one week after he rallied Tennessee to an overtime victory at South Carolina, where he became the first Vol to throw for 300 yards and run for 100 yards in the same game. This week, though, Dobbs and that young, loaded offense have a tough test when it hosts Missouri, which sits in first place in the SEC East. Tigers junior defensive end Shane Ray leads the SEC with 11.5 sacks and will be going up against an offensive line that has allowed 33 sacks on the season.

Notre Dame QB Everett Golson & Louisville S Gerod Holliman: The beleagured Notre Dame defense will have its hands full with a Louisville offense that features a lot of skilled and speedy playmakers. So Fighting Irish coordinator Brian VanGorder will have to figure out a way for his defense to slow down that Bobby Petrino offense in South Bend. With Will Gardner out, Reggie Bonnafon is the new QB, and he's coming off of a nice effort against Boston College. But all eyes will be on the other side of the ball for the Cardinals, as DB Holliman leads the nation in interceptions with 13. And Irish fans know all about Golson's problems protecting the football. The Fighting Irish offense leads all Power Five teams in turnovers, so Golson will have to be aware of Holliman's presence at all times.

Boston College's O-Line: It's no secret that Florida State has been dangerously playing with fire for most of the season. But the Seminoles should be applauded for finding ways to win and being the last remaining unbeaten. Before Jimbo Fisher and Co. battle Florida and play in the ACC title game, Boston College will come into Tallahassee with one of the more physical brands of football in the country. Steve Addazio's squad has a win over USC back in September, which came one week after the Trojans were beaten up against Stanford. The Eagles put up a stunning 452 rushing yards on the Trojans. And while they may not have quite the success this week, the Eagles should be able to find running room against an FSU front seven (depleted with Eddie Goldman, Nile Lawrence-Stample and Justin Shanks out) that allowed 158 rushing yards to Louisville and saw Miami (FL) rush 40 times and record 492 total yards last week. Addazio is all about physicality and toughness, as the offense averages 49 rushes per game. And controlling the ball on the ground keeps the other offense off of the field. BC wants to keep this game close into the fourth quarter, when it hopes to take advantage of a tired FSU defense. Keep in mind that the Eagles gave FSU a very tough game last year.

Other things to watch on Saturday:

Minnesota at Nebraska: The Golden Gophers can win the Big Ten West division if they win their final two games. Jerry Kill's squad will have to win in Lincoln, though, one week after the Cornhuskers were embarassed by Melvin Gordon and Wisconsin in Madison. Meanwhile, the Badgers travel to Iowa City to face the Hawkeyes. The Heartland Trophy game also has big West division implications. What kind of encore can Gordon deliver after his 408-yard day last week? He continues to chase the single-season rushing record and has a chance to break Ron Dayne’s Big Ten mark of 2,109 yards.

Utah wide receiver Kaelin Clay has three punt returns for touchdowns (and obviously should have four because he relinquished the football before crossing the goal line in the loss to Oregon) and has run a kickoff back for a score this season. He faces Arizona this week, and this game figures to be nothing short of wild.