1. Virginia Tech: The Hokies snagged an overtime victory over Georgia Tech on Monday night, giving them a huge ACC Coastal division win. The offense didn't look great, but Bud Foster's defense will be tough to deal with all season long. 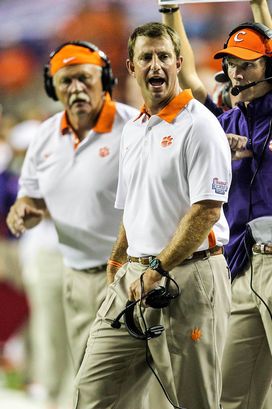 2. Clemson: For the second straight season, Dabo Swinney's squad was able to claim a win over Auburn. The home showdown in October against Virginia Tech will be one of the better ACC games of the season.

4. Georgia Tech: Paul Johnson's Yellow Jackets suffered a heartbreaking loss to Virginia Tech, but Al Groh's defense played exceptional. Can GT put the loss behind and get back into the Coastal division race?

5. N.C. State: All-America cornerback David Amerson had a rough game in the loss to Tennessee, and Mike Glennon tossed four picks as the Wolfpack started the season with a major disappointment.

6. Virginia: Michael Rocco threw for 311 yards and a touchdown as the Cavaliers defeated Richmond.

8. Miami: Al Golden's squad shook off a rough start and received a big day from freshman running back Duke Johnson as the Hurricanes claimed a 41-32 road victory over Boston College.

9. Wake Forest: Jim Grobe's team suffered through an ugly win, having to come from behind to defeat Liberty 20-17.

10. Duke: David Cutcliffe's crew scored 30 points in the second quarter of its 46-26 rout of Florida International.

11. Boston College: Chase Rettig completed 32 of 51 passes for 441 yards and two touchdowns for BC, but the Eagles could not defeat Miami despite jumping out to a 14-0 lead.