There were some subpar efforts from some major programs in Week 1 of the college football season.

Which teams are primed to bounce back?

Let's take a look at those in the best position and those who could be staring at an 0-2 start.

Note: Miami would have made this list following its loss to Maryland, but the Hurricanes have a bye and will get extra time to prepare for their game against Luke Fickell's Ohio State squad next Saturday. Jacory Harris will get the call under center as first-year head coach Al Golden tries to avoid a winless start.

Mark down the 'W'

ICONChip Kelly and the Ducks don't have to worry about an SEC foe this week.

Oregon: Nevada is in for a long day against an Oregon offense ready to explode after running into difficulty in the opener against LSU's fierce SEC defense. Even if the Wolf Pack still had Colin Kaepernick running the show, Darron Thomas, LaMichael James and Co. would steamroll Chris Ault's squad. Chip Kelly's Ducks notch their first win en route to running the table the rest of the way.

Ole Miss: The Rebels host Southern Illinois after giving away their season opener in Oxford against BYU. Nothing against the Cougars, but SEC head coaches don't survive too many bad losses at home. And that's exactly what this was for Houston Nutt, whose team fell to Jacksonville State in the season opener last fall. The Rebels produced a better than expected defensive effort against Bronco Mendenhall's Cougars, and they'll be primed to take out their frustrations on the Salukis this weekend.

UCLA: Things get a little easier for Rick Neuheiel this week as his Bruins host San Jose State. But the embattled head coach was not pleased with his team's performance in practice Wednesday. According to the Los Angeles Times' Chris Foster, Neuheisel shouted at the end of practice, "I can't be the only one who cares." Yikes. Richard Brehaut should remain at quarterback as Kevin Prince continues to be plagued by injuries, and the Bruins should notch their first win of the year. But where is the defense in Westwood?

SMU: June Jones' Mustangs open C-USA play as they host UTEP, a squad that doesn't return many starters from last season's 6-7 team. The Miners struggled against Stony Brook in their season opener while SMU couldn't hang with likely SEC-bound Texas A&M. Quarterback Kyle Padron and this offense will explode against UTEP, a team that hasn't been able to sustain success under Mike Price.

They can't really lose again, can they?

TCU: The Horned Frogs jump right into conference play as they begin their last season in the Mountain West by traveling to Air Force, which is led by rising coaching star Troy Calhoun. Last year's Rose Bowl champs were shredded by Robert Griffin III and Baylor's offense last Friday night, as TCU allowed 564 yards of total offense. Against the Falcons, Gary Patterson's squad will face a team that ran for 391 yards in last week’s victory over South Dakota. It's a completely different offense than the pass-happy attack from the boys in Waco. Can the TCU defense contain Falcons quarterback Tim Jefferson and the Falcons' triple-option attack? TCU claimed a 38-7 victory last season, but Patterson had a senior-laden defense in 2010.

Notre Dame: After one of the sloppiest Fighting Irish openers in recent memory, Brian Kelly's squad must travel to Michigan Stadium to face the Wolverines in a prime time showdown. And it won't be easy, especially with ticket demand at an all-time high. But facing a raucous crowd, new starting quarterback Tommy Rees has the calm and cool demeanor to lead an effective offensive attack. Look for more carries from Cierre Wood and Jonas Gray, and there should be plenty of Michael Floyd as well. The Wolverines looked better on defense under Greg Mattison in Week 1, but they still gave up their share of yards. ND's defense gives the Irish the edge in this one, and Kelly's squad can't possibly be as sloppy as it was in the loss to USF last week.

Georgia: Mark Richt could be looking at an 0-2 start as the Bulldogs welcome South Carolina into Sanford Stadium. The Bulldogs were thoroughly outplayed, especially in the second half, last week in the opening loss to Boise State at the Georgia Dome. This week, the 'Dawgs face a Gamecocks squad that hit its stride once Stephen Garcia entered the game last week. UGA's offensive line will have problems dealing with Ellis Johnson's defensive front, and Marcus Lattimore will be able to run effectively against Todd Grantham's 3-4 scheme. Sports-talk radio hosts in Athens will be fielding calls from angry fans all week long. 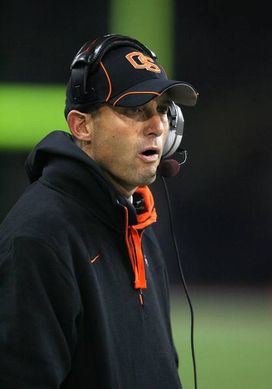 ICONMike Riley and the Beavers could be in for a long season.

Oregon State: After falling in overtime to Sacramento State, things get worse for Mike Riley and the Beavers as they travel to Wisconsin to take on a Badgers team that can seemingly score at will. Oregon State likely will be without start freshman running back Malcolm Agnew, and the Beavers now have questions under center. Too much offensive firepower for the Badgers against a defense which lacks depth.

Duke: The Blue Devils are in for a long day against the nation's best quarterback, Heisman Trophy contender Andrew Luck, after a terrible opening loss to Richmond. Duke head coach David Cutcliffe is running out of time in Durham.

Indiana: After losing his head-coaching debut to Ball State, Kevin Wilson welcomes Mike London's Virginia squad to Bloomington. London is making strides on the recruiting trail, but can the Hoosiers claim victory with a solid offensive showing?

Colorado: The Buffaloes host Cal -- a fellow Pac-12 member -- in a nonconference game in a quirky scheduling scenario as a result of CU's move from the Big 12. Rodney Stewart must run the ball more effectively than he did in the opener if the Buffaloes want to be competitive this season.