With that in mind, let's take a look at how the best of the non-BCS squads rank after one week. And, in case you missed them yesterday, check out the power rankings for the six BCS conferences by clicking on the College tab at the top of this screen and choosing the individual league.

The Fighting Irish went overseas to begin the Everett Golson era, thoroughly handling Navy 50-10 in Dublin, Ireland, this past Saturday. Theo Riddick and George Atkinson both ran for two touchdowns in place of suspended starting running back Cierre Wood, and defensive end Stephon Tuitt returned a fumble 77 yards for another score. Next up for the Irish is a tricky home opener against Purdue.

Bronco Mendenhall's squad thoroughly outplayed Washington State in Mike Leach's debut as Wazzu's head coach, holding Leach's high-octane Air Raid offense to 224 total yards, intercepting Jeff Tuel twice and sacking him three times. The Cougars have a brutal road schedule, with games at Utah, Boise State, Notre Dame and Georgia Tech. But the positive side of that schedule is that they can make some noise and be a BCS buster if they can win away from home. 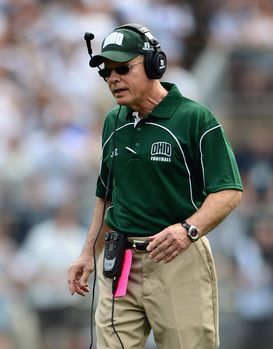 US PRESSWIREOhio head coach Frank Solich led the Bobcats to a road win over Penn State.

The Bobcats opened the season with a huge comeback win at Penn State. Led by dual-threat quarterback Tyler Tettleton, the Bobcats erased an 11-point halftime deficit behind Tettleton's 371 total yards and three touchdowns scores (two passing and one rushing). Frank Solich's squad also clamped down defensively when it needed to do so. Other than having to travel to State College, this is not a very difficult 2012 schedule for an Ohio program that won 10 games for the first time in its history last season.

The Bulldogs' season opener against Texas A&M last Thursday night was postponed until October because of the hurricane. So Sonny Dykes and the Bulldogs will now have to play an Aggies squad that will be a bit more comfortable in their debut season in the SEC rather than getting them a bit cold in the opener. Still, Dykes has this program on the rise as he enters his third season in Ruston. This offense is dangerous, headlined by receivers Quinton Patton, Myles White and D.J. Banks as well as quarterback Colby Cameron. In 2011 the Bulldogs beat Ole Miss and fell to Mississippi State in overtime before losing by just a touchdown to TCU in their bowl game. So they can compete with bigger programs. In addition to A&M, Louisiana Tech also faces Illinois and Virginia this fall, so this squad can be a legit BCS buster.

The Knights won't be going bowling because of NCAA sanctions, but George O'Leary's squad very well could be the best team in Conference USA. The UCF defense had four takeaways and Blake Bortles passed for 168 yards and three touchdowns to ruin Akron head coach Terry Bowden's return to FBS last Thursday night, as the Zips were thoroughly beaten 56-14. The Knights used the rushing combo of Latavius Murray and Miami (FL) transfer Storm Johnson to help pace the offense. UCF travels to Ohio State this weekend in what is essentially a de facto bowl game for the Knights.

The Wolf Pack went into remodeled Memorial Stadium in Berkeley and put Cal head coach Jeff Tedford squarely on the hot seat by scoring a 31-24 victory. Stefphon Jefferson ran for 145 yards and had three touchdowns, while Cody Fajardo completed 25 of 32 passes for 230 yards and added 97 yards rushing and a score. Nevada hosts USF this weekend in a very intriguing nonconference showdown.

Despite their opening losses, still keep an eye on...