1. Oregon: Marcus Mariota was very impressive in his debut as the new starting quarterback in Eugene, and the opening win over Arkansas State could have been a lot uglier but head coach Chip Kelly called off the dogs.

2. USC: The Trojans picked up where they left off offensively, but all eyes remain on Monte Kiffin's defense. 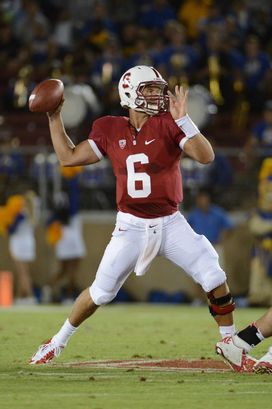 US PRESSWIREJosh Nunes did not make Stanford fans forget about Andrew Luck in the team's season opener.

4. Utah: Keep an eye on quarterback of the future Travis Wilson, who ran for two scores in the Utes' win over Northern Colorado.

6. UCLA: Redshirt freshman Brett Hundley is dangerous as a runner, but can the Bruins receive improved play from their defense?

7. Arizona: The Wildcats amassed 624 yards in Rich Rodriguez's debut in the desert, but they needed overtime to get by Toledo.

9. Oregon State: Mike Riley’s Beavers had their game against Nicholls State postponed, so Wisconsin will now serve as the team's season opener.

10. Cal: Jeff Tedford is squarely on the hot seat after a season-opening home loss to Nevada.

11. Washington State: Former Texas Tech head coach Mike Leach didn't have the debut that many had expected in a Thursday night road loss to BYU.

12. Colorado: The Buffaloes lost to in-state rival Colorado State. Kansas transfer Jordan Webb was 22 of 41 for 187 yards and two scores for Colorado as Jon Embree continues the rebuild in Boulder.