1. Alabama: The Crimson Tide saw no dropoff from their BCS national championship team in a thorough beating of Michigan at Cowboys Stadium. 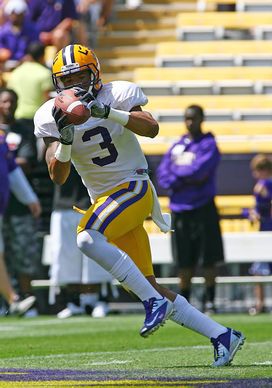 US PRESSWIREOdell Beckham Jr. is a valuable weapon in the return game for LSU.

2. LSU: Odell Beckham Jr. filled in beautifully for Tyrann Mathieu as the Tigers' new punt returner, taking one back 70 yards for a score in the opener.

3. Arkansas: Tyler Wilson set the Razorbacks school record for passing yards in a season opener during the team's win over Jacksonville State.

4. South Carolina: The Gamecocks survived a Thursday night tilt in Nashville against Vanderbilt thanks to Marcus Lattimore and a strong defensive effort.

5. Georgia: Freshman running back Todd Gurley stepped up and filled the vacancy left by Isaiah Crowell in the Bulldogs' win over Buffalo.

6. Florida: Jeff Driskel is now the team's No. 1 quarterback, but can the Gators find enough offensive consistency to be a player in the SEC East?

7. Tennessee: Derek Dooley’s make-or-break campaign started off strong with a season-opening win over NC State in the Georgia Dome.

9. Auburn: The Tigers fell to ACC foe Clemson for the second straight season, as sophomore quarterback Kiehl Frazier struggled to find consistency in the passing game.

10. Vanderbilt: The Commodores played South Carolina tough in their season opener, but James Franklin's squad was unable to pull off the upset.

11. Texas A&M: A&M's first game as a member of the SEC was postponed. The contest against Louisiana Tech has been rescheduled for October 13.

12. Mississippi State: The Bulldogs displayed a balanced offense in their win over Jackson State. Next up is a tough matchup against an Auburn team hoping to avoid an 0-2 start.

14. Kentucky: The Wildcats lost their in-state rivalry game to Louisville this past Sunday and will try to rebound against Kent State this week.