Week 1 of the 2014 college football season is in the books, which means the year is already going way too fast. And while Week 2 doesn't have a ton of intriguing matchups on paper, there are still key games that will help shape the inaugural College Football Playoff and possibly change the direction of the season for some teams in a bit of limbo.

Texas QB Tyrone Swoopes: With David Ash out and his future in a Longhorns uniform in serious doubt because of concussion-related symptoms, the offense has turned over to the dual-threat sophomore Swoopes, who has very good size at around 6-4 and 245 pounds and will be making his first career start against BYU. He brings a new dimension to this offense because of his ability to run and being difficult to wrap up. The 'Horns could employ some more QB-designed runs and zone-read plays, and they could also move the pocket to give Swoopes more flexibility. But he is not the most polished of passers, and the quarterback competition with Ash this past offseason was never really close. Prized recruit Jerrod Heard is not expected to play against the Cougars for OC Shawn Watson, so this game is all about Swoopes and making sure he limits his mistakes, connects on the intermediate throws and converts key third downs. The Texas defense played great in the opener, so Charlie Strong will be looking to ride the 'D' while Swoopes is more of a caretaker for an offense with an inexperienced line. Kennedy Estelle, Desmond Harrison and Dominic Espinosa will all be missing from the line this week. Expect a lot of running backs Malcolm Brown and Johnathan Gray, two of the Big 12's best rushers, as Swoopes adjusts. The offense doesn't need to beat the Cougars, but it must be better than the unit that punted eight times in the 40-21 loss in Provo last season. 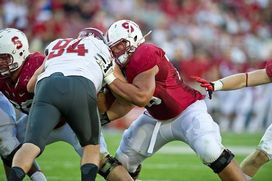 Stanford LT Andrus Peat: The USC-Stanford game is going a bit under the radar because a lot of the focus both out West and nationally has been on Michigan State-Oregon. But the matchup on The Farm will feature a battle between two top junior NFL Draft prospects: Trojans defensive lineman Leonard Williams and Cardinal offensive lineman Peat. Regardless of position, Williams might be the best player in the country, and he had a standout season last year despite not even being 100 percent healthy. He'll shift along the defensive line because he is very versatile and athletic, but Williams should still see enough one-on-one matchups against Peat, who will have his hands full despite being a top LT. Williams is battling a bum ankle, though, so the 6-7, 316-pound Peat will have a chance to have his good technique and athleticism stand out against the nation's best D-Lineman.

East Carolina WR Justin Hardy: The Pirates have a juicy nonconference matchup with South Carolina, which allowed 511 passing yards in a walloping at the hands of Texas A&M in its season opener. That was against first-time starting quarterback Kenny Hill. Now, the Gamecocks have to contend with Shane Carden and Hardy, which is one of the more potent QB-WR combos in the country. Carden completed over 70 percent of his throws last year, while Hardy had nearly 1,300 receiving yards. The wide receiver could have entered the NFL Draft after last season, but he came back to improve his stock. He has a chance to be a late first-rounder, and a big game against the Gamecocks would help his cause. South Carolina defensive coordinator Lorenzo Ward's young cornerbacks were exposed as the pass rush was often nonexistent against A&M. If serious improvement hasn't been made in a little over a week's time, it could be another long day for the Gamecocks.

Notre Dame CB Cole Luke: The Irish remain without KeiVarae Russell, who is one of five members of the team suspended due to allegations of academic fraud. Russell was one of the better cornerbacks in the nation heading into the season, and the addition of Florida transfer Cody Riggs was expected to make the secondary a strength for the Irish. Luke was pressed into starting action last week, and he looked good against Rice. But the 5-11, 190-pound sophomore, who played nickelback and corner last year, faces a huge test in Michigan wide receiver Devin Funchess, who is a big, skilled former tight end coming off of a three-touchdown performance in the opener. Keep an eye on Luke when the Wolverines are near the end zone. His likely matchup with Funchess is one that Wolverines quarterback Devin Gardner might look to expose because of that size differential.

Oregon QB Marcus Mariota: Fair or not, Mariota has become the de facto face of the Ducks’ offensive struggles against physical teams such as Stanford (despite the team struggling against Auburn before Mariota’s starting tenure). Mariota was actually slightly ahead of Jameis Winston in my Heisman Watch last year until he suffered a late-season knee injury that affected him starting with the Stanford game. But he is arguably a Top 5 NFL Draft pick, and he picked off where he left off in two quarters of action last week against South Dakota, completing 70 percent of his throws and rushing for 43 yards and a score. He didn’t play terribly in the game against the Cardinal last year, but the Ducks offense was not its efficient self. He leads a unit that is going up against a Michigan State squad with a similar physical yet athletic defensive unit. Bottom line is he needs to play at his best for Oregon to stay unbeaten.

Ohio State & UCLA Offensive Lines: The Buckeyes and the Bruins have College Football Playoff aspirations, but neither program will get a spot in the four-team dance if the offensive lines do not come together and dramatically improve. The Buckeyes face a big test against Bud Foster’s Virginia Tech defense one week after struggling against a Navy team with no future NFL Draft picks on that side of the ball. Urban Meyer said this week that the No. 1 concern is offensive line. The Bruins, meanwhile, are once again facing serious O-Line issues after Brett Hundley was unprotected (sacked five times) and the ground game was stifled in the opener against Virginia. This has been an area of concern for the Bruins the last two seasons. This week the Bruins get Memphis at the Rose Bowl. While no one expects an upset, the Bruins need to expect a real test against this Tigers defense. Coordinator Barry Odom has helped transform the unit in his first two seasons. Memphis was No. 39 both in total defense and in QB sacks per game last year, and it held Austin Peay to 30 passing yards and 1-of-13 on third downs in Week 1. UCLA could be without center Jake Brendel again and has a lighter freshman guard on the line. It’s an area to monitor again this week.