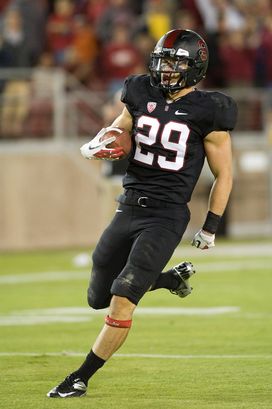 US PRESSWIREEd Reynolds had two interceptions in Stanford's win over Duke.

3. Stanford (2-0): Ed Reynolds returned one of his two interceptions for a touchdown and the Cardinal rolled past Duke 50-13.

4. UCLA (2-0): The Bruins defense is alive and well after helping Jim L. Mora move to 2-0 with a win over Nebraska at the Rose Bowl.

5. Arizona (2-0): Ka'Deem Carey scored four touchdowns and Matt Scott threw for 320 yards and two scores as the Wildcats defeated Oklahoma State 59-38 to get Rich Rodriguez off to a 2-0 start.

7. Washington (1-1): Keith Price was harassed all night long by the LSU defense as the Huskies struggled in Baton Rouge.

8. Oregon State (1-0): Mike Riley’s Beavers won the battles at the line of scrimmage in a season-opening win over Wisconsin.

11. Washington State (1-1): Jeff Tuel threw a pair of touchdown passes to Isiah Myers as the Cougars were able to hang on and beat Eastern Washington 24-20.

12. Colorado (0-2): The long rebuild for Jon Embree in Boulder continues after a stunning 30-28 loss to Sacramento State.