1. Ohio State (3-0): Braxton Miller connected with Devin Smith on a 72-yard touchdown pass with 3:26 left as the Buckeyes survived a home scare from Cal.

2. Michigan State (2-1): In their 20-3 defeat to Notre Dame, the Spartans had their worst showing on offense at home since losing by the same score to Central Michigan in 1991.

3. Michigan (2-1): Denard Robinson recorded 397 yards of total offense and accounted for four touchdowns in a 63-13 beat down of Massachusetts. 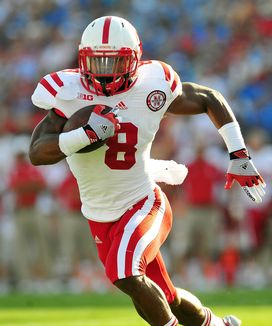 US PRESSWIREAmeer Abdullah has filled in very well for the injured Rex Burkhead at Nebraska.

4. Nebraska (2-1): Ameer Abdullah ran for a career-high 167 yards and two scores while filling in for the injured Rex Burkhead as the Cornhuskers beat Arkansas State 42-13.

6. Wisconsin (2-1): The Badgers survived a scare from Utah State when kicker Josh Thompson missed a 37-yard field goal with seconds remaining, allowing Bret Bielema's squad to hold on for a 16-14 victory.

9. Illinois (2-1): Backup quarterback Reilly O'Toole threw for 333 yards and five touchdowns and receiver Ryan Lankford had 97 yards and two scores to lead the Fighting Illini to a 44-0 win over Charleston Southern.

11. Minnesota (3-0): Max Shortell came in for an injured MarQueis Gray and passed for 188 yards and three touchdowns to help the Gophers beat Western Michigan 28-23.

12. Indiana (2-1): The Hoosiers fell to Ball State for the third straight time. When does basketball season begin?