1. Florida State (4-0): EJ Manuel passed for a career-high 380 yards while rushing for another 102 in the Seminoles’ statement win over Clemson.

3. Virginia Tech (3-1): The Hokies bounced back from their loss to Pittsburgh by holding Bowling Green to 266 total yards in a 37-0 victory. 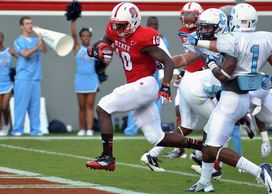 4. N.C. State (3-1): Freshman Shadrach Thornton, playing in his first college game, ran for 145 yards and two touchdowns in the Wolfpack's 52-14 win over The Citadel. N.C. State was without running backs Mustafa Greene, James Washington and Tony Creecy but still managed to rush for a season-high 284 yards.

6. Georgia Tech (2-2): Both of the Yellow Jackets' losses have come in overtime against league competition.

7. Wake Forest (3-1): The Demon Deacons bounced back from their thrashing at the hands of FSU to claim a 49-37 win over Army.

8. Maryland (2-2): Randy Edsall's squad played West Virginia tough on the road but fell to the Mountaineers 31-21.

9. North Carolina (2-2): Running back Gio Bernard scored two touchdowns in his return from a knee injury, and the Tar Heels took over the game in the second half to beat East Carolina 27-6.

11. Boston College (1-2): The Eagles were off this past weekend and will face Clemson on Saturday.