2. Michigan State (3-1): The Spartans received a career-high 253 yards from Le’Veon Bell as they struggled to put away winless Eastern Michigan in a 23-7 victory. 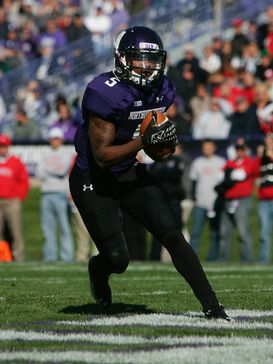 US PRESSWIREVenric Mark had 117 yards and three scores in NU's win over South Dakota.

4. Northwestern (4-0): Venric Mark ran for 117 yards and three scores as the Wildcats claimed a 38-7 victory over South Dakota.

5. Michigan (2-2): The Wolverines finished minus-4 in turnover margin in their loss under the lights at Notre Dame.

6. Wisconsin (3-1): The Badgers received a strong effort from new starting quarterback Joel Stave in their 37-26 victory against UTEP. But how much time will Montee Ball miss?

7. Minnesota (4-0): Max Shortell filled in for an injured MarQueis Gray and threw for 231 yards, and the Gophers defense forced four turnovers in a 17-10 victory over Syracuse.

8. Purdue (2-1): The Boilermakers had a bye this past weekend and will host Marshall on Saturday.

10. Iowa (2-2): Former walk-on fullback Mark Weisman remains a cult hero, but the Hawkeyes' defense and special teams faltered at the wrong time in a 32-31 loss to Central Michigan.

11. Illinois (2-2): The Fighting Illini committed six turnovers in a 52-24 home thrashing at the hands of Louisiana Tech.

12. Indiana (2-1): The Hoosiers had a bye this past weekend and will travel to Northwestern on Saturday.