Every Tuesday during the season I will release league power rankings, which you can find under the College tab at the top of this page. The six BCS conferences will all have their own power rankings, while I will also rank the best of the non-BCS squads, including the Independents.

With that in mind, let's take a look at how the best Independents and non-AQ teams shape up:

1. Notre Dame (4-0): Manti Te'o had two interceptions and the Fighting Irish picked off five Michigan passes and forced a fumble in a 13-6 win over the Wolverines. The Fighting Irish are off this week and will play Miami (FL) at Soldier Field on October 6.

2. Ohio (4-0): Derrius Vick, filling in for an injured Tyler Tettleton, passed for four touchdowns as the Bobcats cruised to a 44-10 win over Norfolk State. Ohio is now 4-0 for the first time since 1976 and will play UMass this week.

3. Louisiana Tech (3-0): The Bulldogs forced six Illinois turnovers and cruised to an easy 52-24 road victory. Sonny Dykes and Co. have another chance to make a statement this weekend when the team travels to Virginia to take on the Cavaliers.

4. Boise State (2-1): Defensive tackle Mike Atkinson's interception return for a touchdown gave the Bronocs their only points in a win over BYU. Chris Petersen's squad will travel to New Mexico this week.

5. BYU (2-2): Bronco Mendenhall's squad turned the ball over five times last Thursday night in a one-point loss at Boise State just a week after losing a heartbreaker to Utah in the Holy War. The Cougars will host Hawaii on Friday. 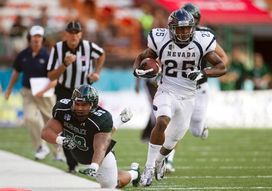 6. Nevada (3-1): Stefphon Jefferson tied an NCAA record by scoring seven touchdowns to lead the Wolf Pack to a 69-24 win over Hawaii on Saturday. The win snapped a seven-game losing streak in Honolulu that dated back to 1948. The team will play at Texas State this week.

7. Utah State (3-1): Kerwynn Williams set career highs with 21 carries for 205 yards and two touchdowns in leading the Aggies past Colorado State 31-19. The team's lone loss was a two-point defeat at Wisconsin. The Aggies will host UNLV this week.

8. UTSA (4-0): The Roadrunners are coming off of a 56-3 win over Northwestern Oklahoma State, and Larry Coker's team will travel to New Mexico State this week.