3. South Carolina (4-0): Connor Shaw completed his final 20 passes for 252 yards and two touchdowns in the Gamecocks' 31-10 victory over Missouri. 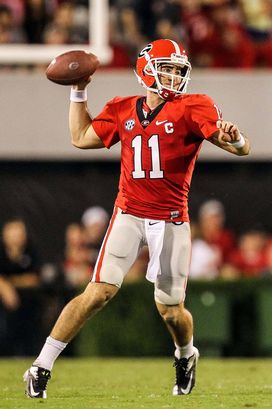 US PRESSWIREAaron Murray and the Bulldogs had an easy time with Vanderbilt this past week.

4. Georgia (4-0): Aaron Murray completed his first 12 passes as the Bulldogs cruised to a 48-3 victory over James Franklin's Vanderbilt squad.

6. Mississippi State (4-0): The Bulldogs have won their first four games for the first time since 1999 and have the upcoming week off to prepare for Kentucky on October 5.

7. Texas A&M (2-1): Johnny Manziel threw for three touchdowns and ran for two more by halftime as the Aggies recorded an easy 70-14 win over South Carolina State.

8. Tennessee (3-1): Tyler Bray threw for 401 yards and four touchdowns and Rajion Neal rushed for a career-high 151 yards as the Vols pulled away for a 47-26 victory over Akron.

9. Missouri (2-2): The Tigers were limited to 109 rushing yards in their SEC East loss to South Carolina.

14. Kentucky (1-3): No player on either roster was alive the last time the Wildcats beat Florida, and no Kentucky player was able to feel exuberance on Saturday after the loss.