• Three-star quarterback Jacoby Brissett, targeted by Florida and Miami, visited with Washington over the weekend as Steve Sarkisian looks to replace longtime Huskies signal-caller Jake Locker and improve the team’s depth under center. Sarkisian already received good news from three-star Derrick Brown, who decided against going to Utah and will now be on his way to Seattle. The 6-3, 240-pound dual-threat prospect, who likens his game to Locker, is mobile and is praised for his leadership ability. Brown will not enroll early, but sophomore Keith Price and redshirt freshman Nick Montana could face competition from Brown in the fall. 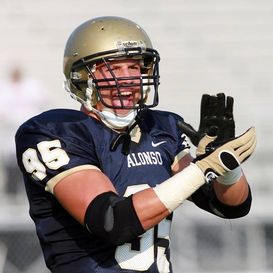 Anthony Chickillo is firm in his commitment to Miami.

• Even if Miami is not able to land Rutgers transfer Tom Savage, it appears that new head coach Al Golden will be getting four-star defensive end Anthony Chickillo of Tampa. He told the Miami Herald that he is firm in his commitment to the Hurricanes after some had speculated that he’d switch to Florida. Golden also hopes to get three-star defensive tackle Elkino Watson of Miami into the fold. The former Temple head coach doesn't have a tackle yet in this class, but Watson made a surprise visit to Coral Gables along with Chickillo.

• Could Charlie Strong add to his impressive 2011 class? Four-star athlete Jon Davis is committed to Kentucky but is reconsidering after the Wildcats signed a second tight end for 2011. The Louisville native wants a guarantee he'll have a shot at either tight end or H-back, and he is scheduled to meet with the Cardinals on an official visit Monday. Davis returned from a visit to Illinois on Sunday night and is expected to decide between the three schools early this week. Meanwhile, three-star quarterback commit DaMarcus Smith continues to reconsider his verbal after four-star signal-caller Teddy Bridgewater switched from Miami to the ‘Ville. Smith wanted to enroll in January after graduating early, but the NCAA Clearinghouse denied him. He visited Central Florida since and continues to weigh his options.

• It’s been a tough stretch for Georgia Tech head coach Paul Johnson and defensive coordinator Al Groh. First, four-star defensive end Stephon Tuitt switched back to Notre Dame after briefly giving the Yellow Jackets a verbal. Now, fellow four-star end Darrius Caldwell of Atlanta decided to head to Illinois and play for Ron Zook. Both Tuitt and Caldwell were projected to fit nicely into Groh’s 3-4 defense. And it especially hurts that the Jackets couldn’t keep the pair in state. Tech is now without a defensive end in this class, and three-star recruit Roderick Byers may stay in-state and sign with South Carolina.