• One of Florida’s early enrollees will miss spring practice, as it was announced that running back Mike Blakely will undergo shoulder surgery on Wednesday. The 5-9, 194-pound Blakely, who missed a portion of his senior season with a foot injury but played through the shoulder injury during the year, is expected to be fully healed by fall camp. He will also likely be the lone running back in the 2011 class for Will Muschamp's squad. The Gators will enter spring with Mike Gillislee, Chris Rainey and Mack Brown at running back. Jeff Demps is expected to miss spring ball because of track.

Meanwhile, linebacker D.J. Pettway still remains interested in the Gators despite his impending visit to Tuscaloosa. The 6-2, 250-pounder from Pensacola Catholic in Pensacola, Fla., committed to Alabama in April, and he has also talked to Miami, LSU, and Florida State. 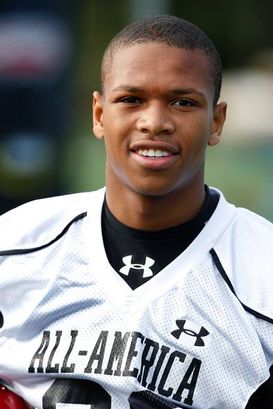 ICONRB Amir Carlisle has switched his commitment from Stanford to USC.

• As mentioned in my College Notebook on Saturday, Jim Harbaugh’s exit from Stanford could affect the Cardinal on the recruiting trail. USC snagged Cardinal running back recruit Amir Carlisle from Sunnyvale (CA), and the all-purpose back's versatility would have been welcome in Palo Alto. Cardinal fans are hopeful that elevating offensive coordinator David Shaw to head coach will help keep the 2011 class together as best as possible.

• Georgia Tech had a big recruiting weekend, netting the services of three commitments from official visitors. Offensive lineman Errin Joe of Lakeland, Fla. is the most notable of the three, but the Yellow Jackets remain in play to land Notre Dame defensive end commit Stephon Tuitt — who would be the biggest fish. In the meantime, athlete Corey Dennis of Troy, Ala. and in-state athlete Demontevious Smith joined Joe in committing, giving Georgia Tech a total of 21 commitments. Smith is the Monroe Area High School teammate of Tuitt, who decided to visit Atlanta this weekend after his basketball game was cancelled.

• TCU has netted a highly recruited defensive lineman out of Klein Oak in Spring, Texas, as Jon Lewis decommitted from Texas Tech and is headed to Fort Worth. The 6-2, 260-pounder also had offers from Alabama, Michigan, Oklahoma State, Baylor, California, Iowa State, Houston, Colorado State and Arizona. Will the Rose Bowl trip continue to pay dividends on the recruiting trail?