Campuses across the country were buzzing this past weekend as a plethora of major-college teams held their annual spring games.

Yesterday at the NFP we took a look at some of the most important takeaways from squads that concluded spring drills on Saturday. Because there was so much action this past weekend, this is Part II of the spring game notebook.

Miami (FL): The best moment from the Hurricanes’ spring game came when head coach Al Golden allowed Malcolm Lewis to score a touchdown after the receiver saw his 2012 season end in September due to an ankle injury against Georgia Tech. Lewis jogged onto the field and hauled in a 75-yard score without any defense being played on Saturday. In the game, quarterback Stephen Morris threw for 256 yards and four first-half touchdowns, and ACC freshman of the year Duke Johnson led all rushers with 120 yards on 10 carries. This 'Canes offense will be explosive in 2013. 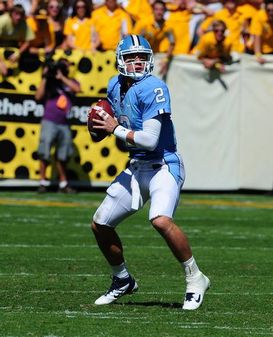 Bryn Renner is set for a big season in Larry Fedora's second year at UNC.

North Carolina: The most outstanding performance for the Tar Heels came from true freshman Khris Francis, who ran 20 times for 101 yards. That speaks to UNC’s running back depth because the team is expected to lean on A.J. Blue and Romar Morris, who combined for 23 carries and 110 yards. Of course, Giovani Bernard left early for the NFL. Meanwhile, quarterback Bryn Renner went 16-of-27 for 216 yards and three touchdowns, and there’s a chance that Renner could see his stock soar toward next year’s NFL Draft, much like Syracuse’s Ryan Nassib experienced this offseason. Defensively, end Kareem Martin had four sacks and Travis Hughes added two sacks.

Ole Miss: Because of numerous injuries causing depth problems, Hugh Freeze and the Rebels held a simulated spring game rather than dividing the team into Red and Blue squads for the Grove Bowl. Wide receiver Ja-Mes Logan was the standout player of the scrimmage, as the senior caught five passes for 101 yards. But the defense highlighted the day, as all-SEC linebacker Denzel Nkemdiche had 10 tackles, defensive back Trae Elston logged three pass breakups and linebacker Serderius Bryant recorded an interception and 1.5 sacks.

Arizona: Rich Rodriguez’s Wildcats suffered a brutal blow this past weekend when it was announced that receiver Austin Hill tore his ACL. On Saturday, Rodriguez confirmed the injury, which occurred last week in practice. Hill was a semifinalist for the Biletnikoff award last fall after recording 81 catches for 1,364 yards and 11 touchdowns. While the team has depth at the position, losing Hill is a tough break for a team looking to ascend up the Pac-12 standings. David Richards and Garic Wharton will need to step in and become even more productive.

Purdue: Defense ruled the day in West Lafayette as there were very few offensive highlights from the team's spring showcase. Jalani Phillips had a sack, an interception and was generating good pressure throughout the contest; Will Lucas had a forced fumble, a tackle for loss and a pass breakup; and Ryan Russell recorded a sack, a forced fumble, and a pass breakup. Meanwhile, Akeem Hunt rushed for 134 yards and a touchdown on 19 carries, and he looked like the No. 1 back that the Boilermakers need in the fall.

Kentucky: The Wildcats have been reborn under head coach Mark Stoops — and they have yet to play a regular season game. But there’s no question that the fanbase is excited, as 50,831 spectators showed up to Lexington on Saturday for the team’s spring game. Not a bad crowd for a team that went winless in SEC play in 2012. Jalen Whitlow played the best out of the quarterbacks vying for the starting job, as he finished 17-of-28 for 193 yards and two touchdowns while adding 49 yards on the ground. But Patrick Towles and Maxwell Smith remain in the mix for the starting gig as well.

Kansas: We know that Charlie Weis loaded up on JUCO recruits in an attempt to drastically improve his team in his second season. But the two major-school transfers that really made a difference on Saturday were former BYU quarterback Jake Heaps and former Oklahoma receiver Justin McCay. Heaps went 20-of-28 passing for 257 yards and four touchdowns, while McCay caught eight passes for 99 yards and a touchdown. The two shared offensive MVP honors. While Heaps had his ups and downs with the Cougars, I believe he is the answer for this offense under center, unlike former Notre Dame signal-caller Dayne Crist. Heaps has had a year in this system, and he’ll have a decent batch of receivers and a sound rushing attack around him.

Duke: Anthony Boone shined in the Blue Devils’ spring game, completing 18-of-30 passes for 273 yards with two touchdowns and two interceptions. The two picks came early in the game, though, and one of them was off of a tipped pass. Jamison Crowder finished with four catches for a team-high 71 yards. David Cutcliffe’s squad, which went bowling for the first time in 18 years in 2012, still has work to do defensively. However, the Blue Devils head coach believes the defense can be more energetic and is hopeful that it gives up less big plays in 2013.