Another jam-packed Saturday of spring games is on the horizon, so let's take a look at the main issues facing each team in action this weekend.

Click here for the Notre Dame spring game preview, which ran Thursday at the NFP.

Alabama: The Crimson Tide will always emphasize the power run game, but offensive coordinator Doug Nussmeier opened things up a bit last year in his first season in Tuscaloosa, and it was easy to do so with quarterback AJ McCarron and receiver Amari Cooper serving as a deadly combination. Add in early enrollee tight end O.J. Howard, who is essentially a big, athletic receiver, and the Tide will be deadly down the seams in the fall. Also keep an eye on how head coach Nick Saban rotates his offensive linemen on Saturday. 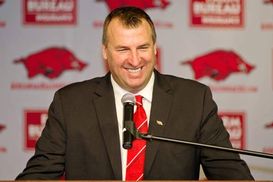 US PRESSWIREBret Bielema is wrapping up his first spring practice at Arkansas.

Arkansas: Brandon Allen seemingly has a slight lead over Brandon Mitchell in the battle for the starting quarterback job in new head coach Bret Bielema's first season with the Razorbacks, but both signal-callers will be looking to make a strong final impression before the beginning of summer. Defensively, the Hogs added depth from the JUCO ranks with cornerback Carroll Washington, safety TQ Coleman and linebacker Myke Tavarres. The main priority for defensive coordinator Chris Ash this spring has been to see which areas the Hogs need the most work on in preseason camp.

Auburn: Gus Malzahn is back on The Plains for his first spring as head coach, and he's witnessed a nice spring from running back Cameron Artis-Payne, a JUCO transfer whose big body should complement Tre Mason in the fall. At quarterback, former prep star Kiehl Frazier will try to put it all together and play up to his potential in the spread as he tries to hold off Jonathan Wallace, who ended last season as the Tigers' starter at quarterback.

Texas Tech: The Red Raiders officially welcome back Kliff Kingsbury to the Texas Tech family after his quick ascent up the coaching ranks at Houston and Texas A&M. The Red Raiders expect a record crowd this weekend as quarterbacks Michael Brewer and Davis Webb compete to lead the offense. Of course, Kingsbury is implementing his high-powered offense. But exactly how pass-heavy it will be under Kingsbury, who is calling the plays, is to be determined. A deep receiving corps, which will be boosted by youngsters Dominique Wheeler and Reginald Davis, will help out whoever lands the starting QB job.

Mississippi State: The Bulldogs lost Thorpe Award winner Johnthan Banks, who was one of the best defensive backs in the country last year. But Justin Cox has adjusted nicely this spring after coming over from the JUCO ranks. Offensively, MSU has serious questions at receiver, but it does return veteran quarterback Tyler Russell. But will he have any playmakers on the outside?

Michigan State: The Spartans could not complement its strong defense with a competent offense last season, as Andrew Maxwell had his share of ups and downs taking over as a first-time starter. But he didn't exactly have help from his receivers. Quarterbacks won't be live this weekend, but Maxwell, Connor Cook and Tyler O'Connor will still get a chance to impress. Meanwhile, Riley Bullough has moved from middle linebacker to running back, where he reportedly has fared well as the Spartans look to replace Le'Veon Bell. Nick Hill and Jeremy Langford will also get plenty of reps in the backfield.

Penn State: The Nittany Lions have a two-man battle between Steven Bench and JUCO transfer Tyler Ferguson for the starting quarterback job, so both players will be looking to make a final strong impression on second-year head coach Bill O'Brien. True freshman Christian Hackenberg will enter the mix in preseason camp. Defensively, Linebacker U. lost Michael Mauti and Gerald Hodges, so Mike Hull and redshirt freshman Nyeem Wartman are being counted on to be the next stalwarts.

Wisconsin: The Badgers open the Gary Andersen era, and all eyes will be on an offense that has been a run-first operation since Barry Alvarez arrived in Madison. Curt Phillips and Joel Stave are in a heated battle for the starting quarterback job, but Danny O'Brien and Bart Houston remain in the mix as well before JUCO transfer Tanner McEvoy arrives. The Badgers will also be breaking in a new defensive scheme, as they will be running a 3-4 alignment.

Oklahoma State: Clint Chelf seems to have the edge for the starting quarterback job, but head coach Mike Gundy continues to maintain that sophomores J.W. Walsh and Wes Lunt are in the race as well. It will be interesting to see if each one gets a chance to go against the first-team defense. Speaking of the defense, cornerback Justin Gilbert will look to bounce back after a tough 2012 season, and Kevin Peterson will look to build on a very solid true freshman campaign. 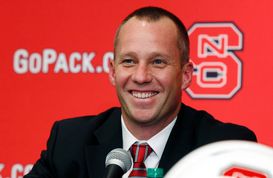 US PRESSWIREDave Doeren will have to choose between Pete Thomas and Manny Stocker at QB.

N.C. State: First-year Wolfpack head coach Dave Doeren will not name a starting quarterback after spring practice, as Pete Thomas and Manny Stocker continue to grasp the new system. But both players will have an opportunity to make a strong lasting impression in the team's spring game. Defensively, the Wolfpack will be replacing three members of the secondary, and they need a couple of pass rushers to emerge at defensive end.

Syracuse: Former longtime Oklahoma backup signal-caller Drew Allen is on his way to possibly steal the starting job for the Orange, but for now Terrel Hunt is in a battle with Charley Loeb. Both quarterbacks will try to make a strong impression on first-year head coach Scott Shafer. Meanwhile, keep an eye on Arkansas transfer Quinta Funderburk, who has really turned heads at receiver this spring. The Orange need help at receiver with Alec Lemon and Marcus Sales gone.

Virginia Tech: All eyes will be on Logan Thomas, the dual-threat quarterback who had a terrible 2012 season after being the talk of NFL Draft experts heading into the season. How will the big, athletic signal-caller look under new offensive coordinator Scot Loeffler? Also, can the Hokies find a renewed running game? J.C. Coleman may not play because of a leg injury, so all eyes will be on Trey Edmunds, who had 86 yards and two touchdowns in the last scrimmage.

West Virginia: The Mountaineers will take their competition to replace Geno Smith into the fall, as nothing will be decided this weekend. Ford Childress and Paul Millard should put up solid numbers, so this battle will drag on into the preseason. Whoever wins the job will not have star receivers Tavon Austin and Stedman Bailey, though, so who will step up as top playmakers for the Mountaineers? Keep an eye on sophomore KJ Myers and JUCO transfer Kevin White. Meanwhile, coordinator K eith Patterson must be able to get any kind of improvement from this defense. Poor tackling and the inability to get any meaningful stops plagued this unit in 2012.

— There are new coordinators on both sides of the ball for UConn. T.J. Weist will try to improve an offense that ranked 118th in total offense last year, and quarterback Chandler Whitmer and top running back Lyle McCombs return. Meanwhile, Hank Hughes will oversee a defense that has lost Sio Moore, Jory Johnson, Trevardo Williams and Blidi Wreh-Wilson. Can head coach Paul Pasqualoni finally have a winning season with the Huskies after back-to-back 5-7 campaigns?

— Matt Rhule concludes his first spring as Temple head coach, and he's overseeing a quarterback battle between Chris Coyer, Connor Reilly, Juice Granger and Thomas Rumer, with all four trying to win the starting job and lead the pro-style attack. Coyer has also lined up as an H-back in practice at times, so there's good depth under center. But can a defense, which is led by Big East freshman of the year Tyler Matakevich, improve?

— Dorial Green-Beckham recorded 21 catches for 267 yards in Missouri’s last five games after a slow start to his freshman season, including the game-tying TD and another in overtime of Mizzou’s 51-48 quadruple overtime win at Tennessee. And in MU’s most recent scrimmage, he had eight catches for 135 yards, including a 50-yard catch-and-run touchdown. He will be a beast in 2013.

— Iowa State will be looking for leaders to emerge on defense after losing Jake Knott and A.J. Klein. In addition, the Cyclones lost their top three receivers from last season's team. Keep an eye on young receivers such as Tad Ecby and Dondre Daley.