What to watch in tonight's USF-Pittsburgh showdown

The Bulls have another chance to show the nation that they are a force to be reckoned with this fall after beating Notre Dame in the season opener, while the Panthers hope to prove that they can actually close out a game in the fourth quarter after back-to-back brutal losses.

Here's what to watch tonight when this Big East showdown kicks off.

And be sure to check out Wes Bunting's take on this contest from a scout's perspective.

Will Pittsburgh have a short memory?

The Panthers have had two incredibly difficult setbacks in a row. Two weeks ago they blew a 21-point fourth-quarter lead at Iowa and lost, and last week the Panthers could not get by Notre Dame despite stifling the Fighting Irish offense. On a short week, can Todd Graham's squad refocus for its conference opener? Pitt has won three straight against USF, including a road game in 2008 when the Bulls were undefeated and ranked in the Top 10. But the offense has struggled, and it's coming off its worst effort last week against the Irish. The good news is that Pitt's defense really came to life against Brian Kelly's squad, as the Panthers shut down Irish standout receiver Michael Floyd. But can it stifle USF signal-caller B.J. Daniels, who is looking more and more comfortable in his second season in this offense? 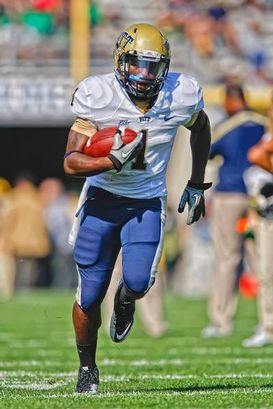 There's no question that Pitt quarterback Tino Sunseri has not looked comfortable in the new spread offense. So the Panthers will want to lean heavily on running back Ray Graham early and ease Sunseri into this contest against an athletic Bulls defense. Graham is the Big East’s leading rusher at 127 yards per game, and the Bulls did allow Notre Dame running back Cierre Wood to rush for 110 yards and a touchdown in Week 1. However, USF currently ranks third in the Big East in rushing defense, allowing just 82 yards per game. But with the passing game not yet clicking for the Panthers, employing a heavy dose of Graham is Pitt's only shot at victory.

The Bulls are road warriors

USF has won its last five games away from Raymond James Stadium dating back to last fall, including the 2011 season-opener in South Bend. Two of those victories were at Cincinnati and Louisville -- places the Bulls had never won previously -- as well as the statement win over Miami and the team's bowl win over Clemson in Charlotte. So Skip Holtz's squad won't be intimidated playing at Heinz Field on Thursday night. In fact, their confidence is at its highest since Holtz's arrival.

Will USF live up to the hype?

The Bulls have started the season 4-0 in four of the past five seasons, but they have never won even a share of a Big East title. But it's hard not to buy into USF this fall as long as Daniels continues to play well. The dual-threat signal-caller is second in the Big East in total offense behind West Virginia quarterback Geno Smith, and he recorded 332 total yards and three scores in a win over UTEP last week. The Bulls have athletes on the defensive side of the ball, as well, led by defensive end Julius Forte. He’s third in the conference with three sacks and is an imposing force along with fellow end Claude Davis. While it's hard to envision Pitt losing a third consecutive game, the Bulls are playing too well right now to fall victim to what appears to be an average Panthers squad.