With all the buzz surrounding Gunner Kiel and an expected announcement soon on his college destination, Chad Kelly has gone a bit under the radar.

The quarterback from Buffalo, N.Y., who originally planned to make his commitment known in early July, is tentatively expected to announce his college intention late in the afternoon on Thursday — though St. Joseph’s athletic director Pete Schneider said the press conference could be pushed back a few days as Kelly completes campus visits and finishes final exams.

But one thing is certain: no matter when he makes his announcement, there’s going to be one happy head coach and a very excited fan base.

While Florida State, Michigan State, Purdue, Syracuse and Buffalo have been listed as finalists for his services, the Class of 2012 prospect has reportedly narrowed his final options to Alabama and Clemson. And according to Tigerillustrated.com, Kelly is leaning toward signing with Dabo Swinney’s Tigers.

Although the St. Joseph's star visited the Crimson Tide staff in Tuscaloosa on Tuesday, he arrived at Clemson that evening and was scheduled to participate in a camp on Wednesday. Might a final visit with Swinney and new offensive coordinator Chad Morris be enough to finalize his decision?

The nephew of Hall of Famer and former Buffalo Bills great Jim Kelly, the rising senior led the Marauders to the Monsignor Martin Championship in 2010, becoming the first signal-caller in New York state history to throw for more than 2,000 yards and rush for more than 1,000 yards in the same season. He finished the 2010 campaign with 1,057 yards and 15 touchdowns on the ground while passing for 2,159 yards and 24 scores through the air.

The 6-2, 205-pound dual-threat quarterback certainly has the talent to fit in well with Clemson’s new offensive attack led by Morris, who arrived on campus after a prolific one-year stint at Tulsa where he produced one of the most high-powered units in the nation. Previously, Morris compiled a 169-38 mark as a high school head coach and helped make Texas quarterback Garrett Gilbert a high-profile recruit.

While Kelly has not faced the stiffest of competition at the high school level, based off of his tape he certainly has the look of a quarterback who should be successful in the college game. Might Morris’ system be the best fit? 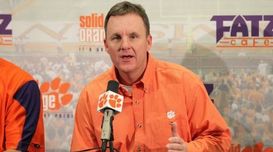 Will new Clemson OC Chad Morris get the chance to coach Chad Kelly?

It certainly would be an intriguing match considering the scheme works best with a mobile, dual-threat quarterback. Kelly is a very good athlete and is well-built, so he should be able to withstand the rigors of running the football. While he also holds his own as a pocket passer, the fact is that he remains a weapon as a rusher — a perfect fit for a spread scheme.

While Tajh Boyd is entrenched as the Clemson starting quarterback this fall, Kelly will face stiff competition no matter which school he chooses to attend. And keep in mind that Boyd has yet to endure a full season under center, so who knows what the future holds.

All Kelly knows is that he wants to attend a school with a family atmosphere because he’ll be away from his tight support group for an extended period for the first time in his life.

Can Swinney and the Tigers provide that comfort level? Or perhaps Nick Saban and the Crimson Tide may be a better fit? Either way, one head coach is going to get a quarterback with a talented skill set — and one very proud uncle.