Whittingham: 'Our program is bigger than the [Holy War]'

One of the most overlooked rivalries in college football could be coming to an end.

Utah head coach Kyle Whittingham told Graham Watson of Yahoo! Sports that the school may not be able to play BYU in football anymore with the Utes entering their second season in the Pac-12. Of course, both schools are former members of the Mountain West Conference and longtime combatants whose rivalry on the field stretches back to 1896. Bronco Mendenhall's Cougars are entering their second season as an independent, which gives the school flexibility in its scheduling. According to Whittingham, that's not a luxury that the Utes enjoy. 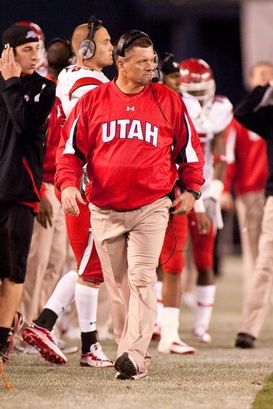 "Our program is bigger than the rivalry. That's got to take a backseat to us doing what's best for our program."

Both schools stated when they left the MWC that they wanted the rivalry to continue, but it's a game that seems to be more important to BYU than Utah. The Utes play nine conference games, so it's understandable that the school may look to schedule an easier nonconference game instead of playing the Cougars.

There's still a chance that the rivalry could pick up again after they meet one more time this season on Sept. 15, but it appears another meeting wouldn't get scheduled until years down the road.