Washington devised a perfect game plan and executed it well enough to pull off a stunning 17-13 win over Stanford on Thursday night at CenturyLink Field in Seattle. 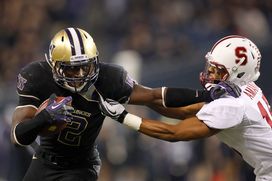 US PRESSWIREKasen Williams scored the go-ahead score for the Huskies against Stanford.

After the Huskies (3-1, 1-0 Pac-12) converted a fourth-down conversion to keep the drive alive, wide receiver Kasen Williams caught a quick screen pass from quarterback Keith Price, broke a tackle near the line of scrimmage and was able to dash 35 yards for the go-ahead score with less than 5:00 remaining to complete a 10-point rally and secure the victory over the Top 10 Cardinal (3-1, 1-1).

Stanford, which was the toast of the Pac-12 after knocking off USC, had its secondary exposed again despite getting constant pressure on Price. Last season in their losses to Oregon and Oklahoma State, poor tackling in the defensive backfield exposed the Cardinal.

The Huskies were down 13-3 late in the third quarter before finding the end zone on a 61-yard touchdown run from tailback Bishop Sankey on a fourth-and-1 conversion.

Last fall, Stanford churned out 446 yards on the ground en route to 65 points against the Huskies. But first-year coordinator Justin Wilcox devised a perfect game plan with extra time to prepare after the team's bye last week.

Knowing that the focus of Stanford's offense was running back Stepfan Taylor, Wilcox put eight or nine defenders near the line of scrimmage to contain the ground game. And it worked, as Taylor finished with 75 yards on 21 carries. And no run was longer than 7 yards. A huge difference from last fall when he ran for 138 yards against Steve Sarkisian's squad.

With the run game less efficient, Cardinal quarterback Josh Nunes was forced to make plays through the air. And he was unable to do so, as he finished 18 of 37 for 170 yards. And third-down efficiency remained a troubling issue for the Cardinal, as they finished just 5 of 18 on conversion attempts.

Nunes was unable to channel his inner Andrew Luck and lead a game-winning drive as Stanford finished with just 235 yards of total offense and were held without an offensive touchdown for the first time since October 2007.

It was a huge win for a Washington team that will play at Oregon next week before returning home to host USC. With that schedule, netting the win over the Cardinal was crucial. Meanwhile, David Shaw must find a way to get more out of his anemic passing attack.