Will Brantley be under center for Florida against LSU?

Leave it to Vegas to always keep things interesting.

Rumors surfaced Tuesday about the health of Florida quarterback John Brantley when Las Vegas oddsmakers took the Gators game against LSU off the board and listed Brantley as questionable for the SEC showdown. 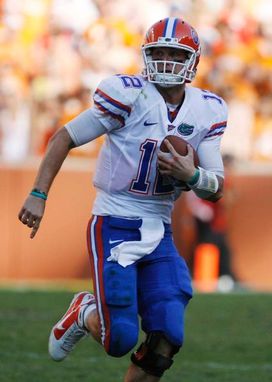 When asked on Tuesday afternoon whether Brantley was fine, offensive coordinator Steve Addazio responded “Yes.” However, when Addazio was asked if the starting quarterback would play Saturday, he simply said “He's doing great.”

Brantley was limited in practice on Sunday night because of a rib injury he suffered against Alabama, but Addazio and several players indicated Brantley will be in action against the Tigers.

The signal caller said himself in his weekly news conference on Monday that, while he was sore, he would not miss any time. He said he stayed down on the field for several minutes after getting hit because he simply had the wind knocked out of him.

“Little sore like any other game would be, but nothing major, nothing that's going to stop me from doing anything,” Brantley said.

He did not appear to be in pain and had no trouble moving around or walking on Monday.

Brantley has thrown for 902 yards and six touchdowns with three interceptions in five games this season while completing 61.4 percent of his passes.