Will Tennessee's Rogers ever learn his lesson?

The Volunteers head coach indefinitely suspended all-SEC wide receiver Da'Rick Rogers from the team Thursday, and he said after practice that he doesn't expect Rogers to play for the Vols in 2012.

Dooley said the suspension was brought about by "recent events." 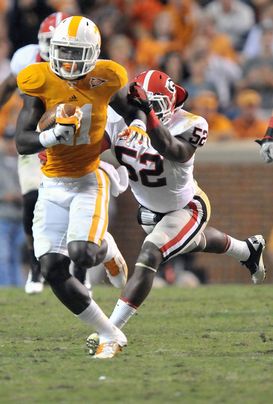 US PRESSWIREWR Da'Rick Rogers will be absent from the Tennessee game plan for the foreseeable future.

The junior Rogers led the conference with 67 catches last fall and was second in the league with 1,040 receiving yards. He had nine touchdown catches in his sophomore campaign.

Just last week Dooley said that Rogers had an exceptional preseason camp, which included having a good attitude as the Volunteers prepared for a make-or-break 2012 season for the third-year head coach.

But Rogers once again could not keep himself out of trouble, which he has been in more than once this past offseason because of a bad attitude.

He reportedly had issues with strength coach Ron McKeefery, and he was technically not a part of the team for a portion of this past offseason before being allowed to work himself back into the rotation. However, there were whispers that he would ultimately transfer while it remained unclear what led to the issue in the first place.

But this latest drama unfortunately reveals that Rogers was not able to take care of business off the field, and it's questionable if we'll see him play in Knoxville ever again.

While the Vols still have talented junior Justin Hunter and impressive junior-college newcomer Cordarrelle Patterson at receiver, the loss of Rogers is a tough blow to an offense that was primed for big things behind quarterback Tyler Bray, a good offensive line and what's expected to be an improved run game.

If Rogers ultimately makes it back into the good graces of the Tennessee football team, lands with another program or pursues his NFL dream, let's hope that this latest incident was the wake-up call that he needed to fulfill such immense potential.