One year after a redshirt freshman quarterback took the college football world by storm, another may be in the process of doing so just one week into the new season. 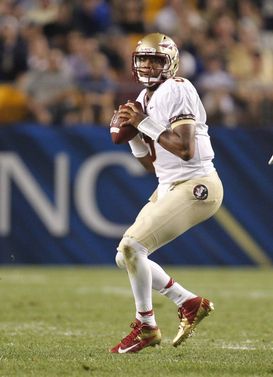 US PRESSWIREJameis Winston exceeded the high expectations in his FSU debut.

Jameis Winston, who took over for EJ Manuel as the starting signal-caller at Florida State, had a near-perfect first game and led the Seminoles to a 41-13 victory Monday night over Pittsburgh, which was making its ACC debut.

The dual-threat two-sport star completed 17 of 18 passes (94 percent) for 240 yards with three passing touchdowns as well as one rushing score in the first half as the 'Noles took a commanding 28-10 lead. And while some may be quick to point out that the Panthers aren't exactly a Top 25-worthy team, Paul Chryst's squad has a talented secondary featuring safety Jason Hendricks, who ranked sixth nationally in interceptions per game last fall, and solid cornerbacks K'Waun Williams and Lafayette Pitts. So Winston's effort did not come against the Little Sisters of the Poor (hello, Gordon Gee). A lot of talent returned from a unit that ranked 17th in total defense in 2012.

Throughout the night, particularly in that opening half, Winston displayed good velocity and nice touch on his throws, strong command of Jimbo Fisher's pro-style offense and poise beyond his years in the pocket. Winston, who set the FSU record for highest completion percentage in a single game at 92.6 percent (previous mark of 87.5 percent by Danny Kanell in 1995), finished the night 25 of 27 passing for 356 yards and four touchdowns. He added 28 yards and a score on five rushes.

Fisher has coached three NFL first-round quarterbacks, so Winston is certainly in position to reach his potential under Fisher's tutelage.

The Jameis Winston era at FSU officially commenced on Monday night. And even the most optimistic fans of the Seminoles had to be surprised by just how good Winston looked in his debut.

They don't call him "Famous Jameis" for nothing.