Spring practice kicks off in Madison on Saturday as Wisconsin begins the post-Russell Wilson era after the former N.C. State quarterback helped lead the squad to another Rose Bowl berth.

Let's take a look at some of the storylines that will play out over 15 practices as the Badgers prepare for their spring game on Saturday, April 28.

Getting to know the new staff

Head coach Bret Bielema is finding out that success often means assistants are going to get better opportunities at other programs as they move up the coaching ranks. But losing six assistant coaches in one offseason is rather odd especially after the Badgers notched back-to-back Rose Bowl appearances in 2010 and 2011. But that's the situation Bielema dealt with this offseason, so the coaching staff and the players will need to use these 15 practices to get acclimated with one another. Perhaps most important is how offensive coordinator Matt Canada deals with a quarterback situation that doesn't look very promising. He inherits stud running back Montee Ball, a solid group of receivers and an always solid O-Line. But this offense will experience growing pains as it moves on from Wilson, former coordinator Paul Chryst and a couple of other assistants on the offensive side of the ball. 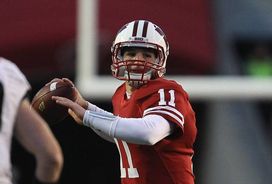 Russell Wilson was a one-year rental, so he departs after helping lead the team to Pasadena last season. Wilson's backup in 2011, Joe Brennan, will enter spring as the de facto starter after appearing in six games last season. But he attempted only 15 passes in mop-up duty and will be working under a new coordinator. Redshirt freshman and former walk-on Joel Stave will be the only 100 percent healthy body in camp, as Curt Phillips is still dealing with a health issue after missing each of the last two seasons while trying to come back from multiple knee injuries. He is, however, expected to participate in the spring in some capacity. The major concern is Jon Budmayr, who would have likely started last year if Wilson hadn't arrived and if he would have been healthy. Budmayr will miss spring practice due to a nerve in his right elbow not properly healing, so his career could be in jeopardy. In addition, freshman Bart Houston has been knocked out of spring drills because he needs surgery on his right throwing arm. Obviously there is a major void under center, one that could possibly get filled by former Maryland starter Danny O'Brien in the summer.

The next round of strong offensive linemen

Peter Konz and Kevin Zeitler have moved on after stellar performances in 2011, but the Badgers are used to replacing top-notch offensive linemen. Junior Travis Frederick could be that next Wisconsin lineman to assume All-American honors after earning second-team All-Big Ten last year, whether it is at left guard or if he is the permanent replacement for Konz at center. The 6-4, 330-pounder will be the anchor of an O-line that only features two seniors, Ricky Wagner and Robert Burge, with Wagner the only vet with starting experience. All-conference tackle Josh Oglesby also graduated, so new position coach Mike Markuson, who takes over with Bob Bostad joining the Tampa Bay Bucs staff after initially joining Chryst at Pitt, will have his work cut out for him.