With Bielema leaving, what's next for Wisconsin?

The Big Ten is on the verge of losing one of its most successful head coaches.

As first reported by Pat Forde of Yahoo! Sports, Bret Bielema will leave Wisconsin to take over at Arkansas. 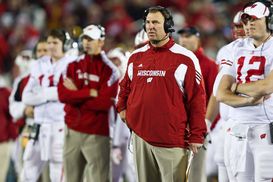 US PRESSWIREBret Bielema is leaving Wisconsin for Arkansas.

The Badgers head coach, who led his team to a Rose Bowl berth for the third straight year, was never mentioned in numerous reports, both local and national, as a possible replacement for John L. Smith with the Razorbacks. Certainly, Hogs athletic director Jeff Long did a wonderful job of keeping Bielema's name under wraps during this search, although it is unknown how high Bielema was on Long's list of initial candidates.

While the news comes out of left field, Bielema could be a good fit with the Hogs because he's used to working harder than most of his fellow Big Ten coaches on the recruiting trail. He will need to be at his best in the rugged SEC, especially with a program that lacks some of the built-in luxuries that other SEC schools possess.

Bielema went 68-24 in seven seasons with the Badgers.

An announcement will reportedly come today, but Bielema is not expected to be introduced as new Hogs head coach until Wednesday.

It is almost a certainty that Bielema will not lead the Badgers in the Rose Bowl, although he may choose to talk Wisconsin/Arkansas officials into staying. However, it seems unlikely, especially because there's a lot of work to be done in Fayetteville with the Razorbacks coming off such a disappointing season. If the Badgers prefer Bielema to depart before the team's bowl game, defensive coordinator Chris Ash could be the interim coach for the matchup with Stanford.

With former Badgers defensive coordinator and Northern Illinois head coach Dave Doeren just being hired at N.C. State, will the Badgers possibly look to Pittsburgh head coach Paul Chryst to replace Bielema? He was the longtime offensive coordinator for the team before being hired away by the Panthers last offseason. Perhaps even Doeren would reasses his new gig for a chance to return to Madison.

Badgers athletic director Barry Alvarez certainly didn't envision having to hire a new head coach anytime soon, but that's the current situation he is facing in Madison. He likely will make a hard push for Chryst because he is so well-known in the program and his offense fits in Madison. Chryst grew up in Madison, went to college at Wisconsin and was OC for the Badgers for six years. If Alvarez could get Chryst to come home, it would make a lot of Badger fans happy after hearing this tough news.