Worry about OU's run game? Not with 'The Belldozer'

Check out my appearance on The Overnight Takeover with John Harris on Yahoo! Sports Radio last night, as I discussed Oklahoma's national title chances and much more.

One of the main reasons why Oklahoma is near the top of many of the major polls and preseason rankings on football sites across the nation is because of its prolific passing attack led by veteran quarterback Landry Jones, who is one of a handful of names prevalent on the many preseason Heisman Trophy lists.

Despite the loss of Ryan Broyles as well as some offseason drama involving a few other receivers on the roster, Jones will have plenty of weapons at his disposal at WR, led by Kenny Stills, freshman and top newcomer Trey Metoyer and Penn State transfer Justin Brown. That trio will headline a group that could also get help from a few true freshmen who arrived on campus this summer. So Sooner fans can expect the prolific aerial attack that they have come to enjoy in Norman.

While the passing game became bogged down last year when Broyles was sidelined by a season-ending injury, keep in mind that one aspect of the offense, in turn, started to flourish: the Belldozer package. 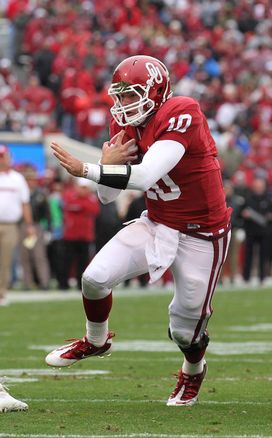 With the Sooners looking for an increased presence on the ground, especially after the season-ending injury to tailback Dominique Whaley, the offensive staff looked to backup quarterback Blake Bell in short-yardage situations to boost the ground game.

And just like that OU was running for touchdowns nearly every time the team was in goal-line situations.

While offensive coordinator Josh Heupel will continue to dial up as many passing plays as needed, he now has the luxury of relying on Bell when tough yards are necessary. And also when the passing game could be going through a rough patch.

Injuries and uncertainty along the offensive line have some worried about whether the OU offense has enough balance to make a run at the national title. But keep in mind that the team has a deep backfield, led by Whaley and Roy Finch. If the O-Line gels, Whaley should flourish as the primary ball-carrier and Finch should pick up where he left off when he showed his explosiveness in filling in for Whaley last fall.

And then there's Bell, whose number will be called quite often no matter how productive or unproductive the O-Line, Whaley or Finch are playing in Norman. Defenses weren't ready for the Belldozer package last year even though they knew it was coming.

The opposition will still know it's coming this fall. But will they be able to contain it?

Based on what we saw in 2011, it will be awfully difficult. And that could be the difference as head coach Bob Stoops looks to bring home another national title to Norman.