In his “Three And Out” piece this week, Rivals.com senior writer Tom Dienhart ponders whether Boise State would win the SEC East if it were to play a full season down South in 2011.

While many in SEC country may not want to admit it, the idea may not be too far fetched, as Dienhart argues that the league may be at its weakest point since the conference went to the division format in 1992.

We’ll certainly see the Broncos get a taste of life in the SEC when they battle Georgia to begin the season in the Georgia Dome in Atlanta.

I think we could all agree that the game will not be reminiscent of the contest these two teams played in during the 2005 season when the Dawgs spanked the Broncos 48-13 in Athens. Boise was just then starting to assert itself on the national stage, and head coach Chris Petersen has taken this program much further since that game. Petersen, of course, was the team’s offensive coordinator that season.

ICONMark Richt has a difficult opening slate this fall, with games against Boise State and South Carolina to start the season.

While Mark Richt’s squad has been a sexy pick to prevent South Carolina from winning back-to-back East division crowns, this Bulldogs team still has major issues.

Even if Todd Grantham’s 3-4 defense is much improved in his second year as coordinator, the Dawgs have questions on offense.

While Aaron Murray is arguably the league’s best quarterback, will he be standing upright consistently enough to get the ball to his receivers — a corps that will be missing top NFL draft pick A.J. Green and gritty Kris Durham?

The team’s line remains a major question mark, especially now with offensive tackle Trinton Sturdivant tearing his ACL and former top recruits Brent Benedict and A.J. Harmon leaving the program via transfers. And while many feel that Isaiah Crowell could have a similar impact that Marcus Lattimore had on South Carolina last season, losing Washaun Ealey and Caleb King from the backfield really increases the pressure on Crowell to deliver right away.

If the Bulldogs fall to the Broncos, South Carolina will be waiting in Week 2. If the Dawgs drop to 0-2, will their season spiral out of control?

Speaking of the Gamecocks, the Head Ball Coach’s squad is certainly the class of the East. But if SC was in the West, how many league wins would this team net? Certainly, Lattimore and receiver Alshon Jefferey are two of the premiere offensive talents in the nation. But quarterback Stephen Garcia will always be the X-factor, or the enigma.

I love Ellis Johnson’s front seven, and Jadeveon Clowney makes a strong pass rush even better. But will the secondary improve after allowing 241.9 yards per game in 2010? Expect the Gamecocks to play more man-to-man coverage, as that was a point of emphasis this spring.

Now, when we look at Florida, this is where the Boise-SEC debate gets very interesting.

First-year head coach Will Muschamp has put his stamp on this program, underscored by the dismissal of top defender Janoris Jenkins. But he has never been a head coach at this level, so a year of adjustment should be expected. While I think eventually the Gators will return to the top of the East, there are many more questions than answers for this squad in 2011. 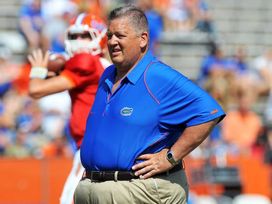 Charlie Weis will try to get the Florida offense clicking again this fall.

Charlie Weis’ scheme works. But can John Brantley thrive running the show? Weis also runs a pro-style offense, which is best suited for bigger backs. Neither Jeff Demps nor Chris Rainey fit the mold, so can the longtime NFL coordinator adjust to his current skill players?

Only four starters return on defense, but the front seven should be stout. However, the loss of Jenkins really weakens a secondary that was already short on experience.

The remaining SEC East teams? Well, none of them are a threat to claim the division crown in 2011.

Tennessee: Derek Dooley squeezed a lot out of his team in 2010, and quarterback Tyler Bray helped lead a late-season offensive revival last fall to get the Vols a bowl bid. But the defense just has too many holes and depth issues to be a factor in the division race this fall.

Kentucky: Second-year head coach Joker Phillips is working hard to elevate the Wildcats toward the top half of the SEC. The improvement must come in league play, where UK has struggled to claim victories. I like new starting quarterback Morgan Newton, but the Wildcats are desperate for playmakers to emerge. Defensively, the ‘Cats return their top 11 tacklers.

Vanderbilt: New head coach James Franklin is hitting home runs all along the recruiting trail. The Commodores will start winning ballgames soon — just not in 2011. Larry Smith returns under center, along with the other 10 starters from offense, but how many of them will keep their jobs as Franklin infuses more youth into the lineup?

Getting back to the Broncos, quarterback Kellen Moore remains one of the more clutch players in the entire nation. And while he loses top receivers Austin Pettis and Titus Young — the two most productive receivers in school history — Tyler Shoemaker and Geraldo Hiwat will do enough to keep the vertical attack prolific.

Overall, the Broncos return 13 starters and a coaching staff that is second to none. And running back Doug Martin continues to go under the radar.