Games started by draft round

DRAFTMETRICS gathered data on the number of games started by draft round for four time periods:

Using this data permitted facilitated an analysis not only the degree of difference by round, but also any
trends during the study periods.

The following table shows the percentage of all games started during the selected time periods by round
and also for undrafted free agents and players selected in the supplemental draft.

There are more significant variations when individual playing positions are reviewed. At the end of this
article DRAFTMETRICS has included four tables, one for each study period, that show the percentage of
starts and ranking of each playing position by round. Fullbacks and players selected in the supplemental
draft were excluded because of the small number of starts for each. The following discussion is based on
data contained in those charts.

Some highlights regarding playing positions:

What is missing from this trends discussion is an analysis of what caused the changes. DRAFTMETRICS
will address that in a future article when drafting trends are also brought into the picture. 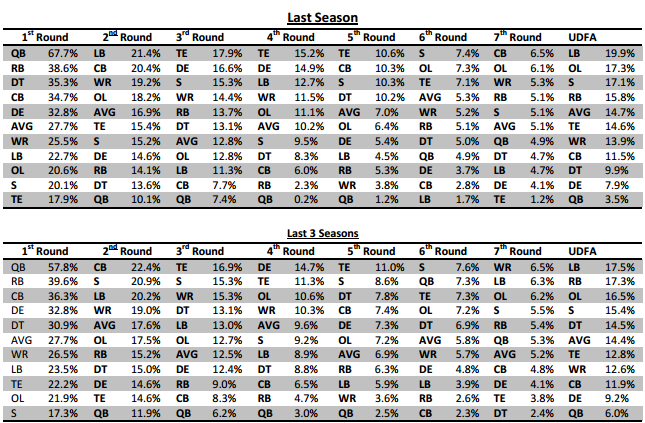