How long does it take to start in the NFL?

No, this is not an article about NASCAR. Starting Velocity, in DRAFTMETRICS parlance, is how fast a player becomes a starter, measured in seasons. A starter is defined as a player who starts at least eight games in an NFL season.

Most DRAFTMETRICS articles are about establishing reasonable expectationsin the draft. For example, what does history suggest about the chances of a team selecting a starting wide receiver early in the first round? Past articles have addressed the probabilities of drafting players who achieve various milestones related to career length, starter status and post-season honors.

The takeaway from this table is that starters ascend to that status relatively rapidly. About two-thirds of
the players who achieve the starting milestones do so within one year of the minimum (e.g. 64% of those who achieve five-year starter status do so by their sixth year in the league). Most people correctly assume that the Starting Velocity is faster when a player is drafted earlier. The following three tables validate that instinctive conclusion. The tables show information for each of the “Value Groups” identified by DRAFTMETRICS in “The Real Seven Rounds of the NFL Draft”. The percentages in the table reflectthe distribution within each Value Group (e.g., 74% of all players selected with picks 1-13 who start at least one season do so in their rookie season). 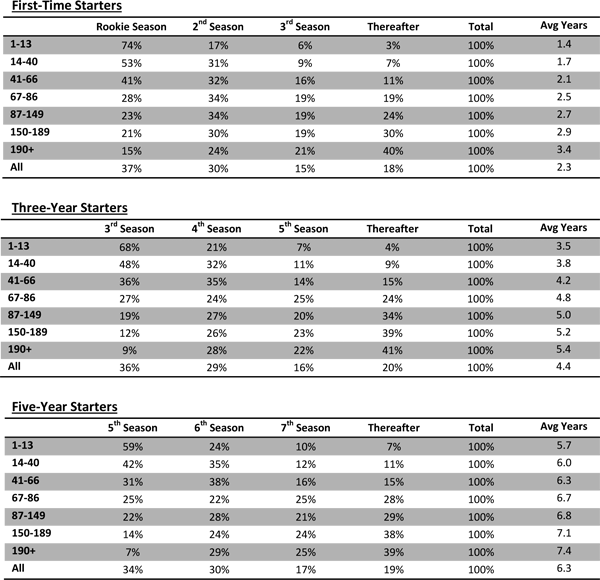 These tables confirm that earlier draft choices do tend to start earlier. The tables also show a significant dividing line between (1) the first 66 picks and (2) later selections for both three- and five-year starters, as shown below, when looking at the percentage of players who achieve each of those milestones
within one year of the minimum:

As the above shows, the drop-off from the 41-66 group to the 67-86 group is 20% and 22%, respectively, for the three- and five-year starters. This is about double the normal decline from Value Group to Value Group.

The final issue addressed by DRAFTMETRICS is whether the Starting Velocity variessignificantly by playing position. DRAFTMETRICS took a look at this on both an overall basis and within Value Group. Only the overall information is presented here (on the next page) for the sake of brevity. Fullbacks are excluded because of the relatively few data points. Once again, the information is presented for each of the three starter milestones. 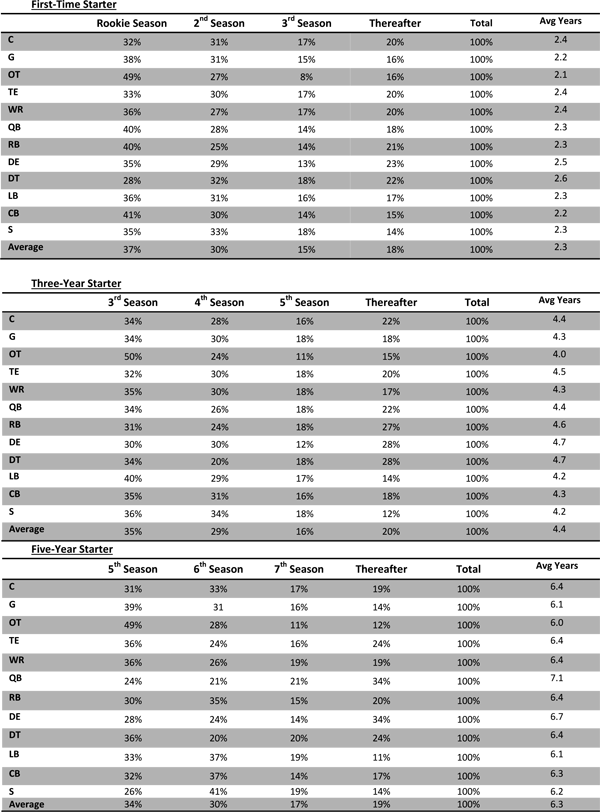 Tony is the founder of DRAFTMETRICS.COM can be e-mailed at draftmetrics@gmail.com and followed on Twitter @draftmetrics