Two weeks ago, CG Technology (formerly known as Cantor Gaming) caught the betting world by surprise with the release of their 2014 NFL season win totals. In previous years, these offerings rarely hit the board before the month of May. But CG decided to beat the competition to the punch this winter and as a result, bettors had the opportunity to wager as much as $1,000 on a season win total before professional football’s free agent period or draft had even taken place.

While it’s rare for the casual gambler to invest in an opportunity like this so far from the start of the season, the same cannot be said for both Las Vegas locals and professional bettors. Not only has the action begun to trickle in close to six months before the first meaningful game will be played, but CG has already been forced to make several notable adjustments to their opening numbers.

The chart below compares the initial offerings to the prices that were listed when I stopped by the CG sports book at the Palms Casino Resort on Wednesday. But before we get to that, let’s take a look at the biggest adjustments that have taken place over the last two weeks.

Note: The Carolina Panthers (8.5 to 8) and Kansas City Chiefs (8 to 8.5) both moved a half game before recent adjustments brought each team back to their opening number.

Here are three selections that caught my eye upon initial inspection:

New York Giants OVER 7 wins (-140): The G-Men have won eight or more games in eight of the last nine seasons and are poised for a turnaround following last year’s underwhelming 7-9 effort.

Arizona Cardinals OVER 7.5 wins (-125): Won ten games under first year head coach Bruce Arians in 2013 and while some will likely predict a regression is in order, I believe this organization is headed for another late-season playoff charge.

Tampa Bay Buccaneers OVER 7 wins (-110): Savvy decision making during the free agency period has new head coach Lovie Smith poised to turn this shipwreck around. Fantasy owners should keep a VERY close eye on this defense, which is Lovie’s specialty. 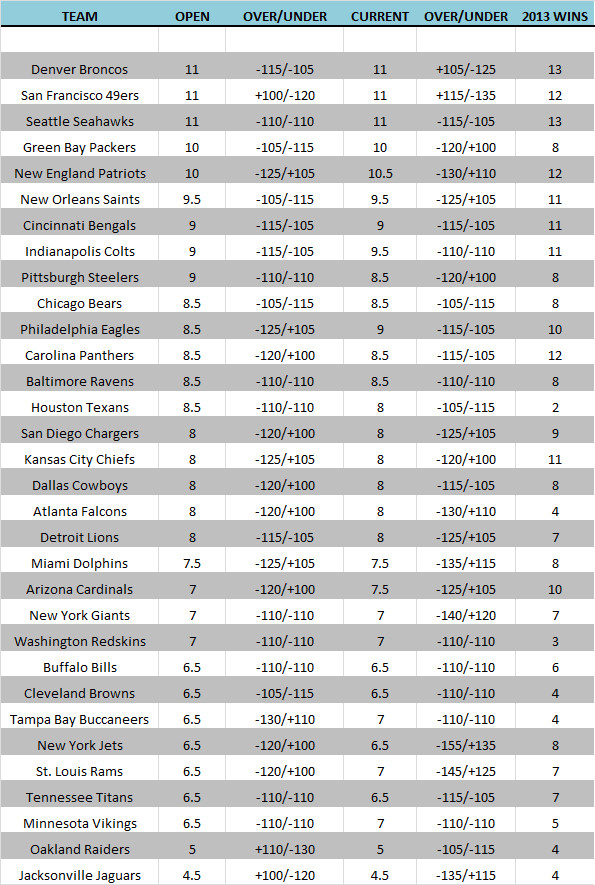