LAS VEGAS—The game before the game is officially underway.

The start of the 2011 Bowl Season is still 12 days away, but Las Vegas and offshore sportsbooks are already knuckles deep in action as most shops released their opening lines for all 35 games Sunday night or Monday afternoon. 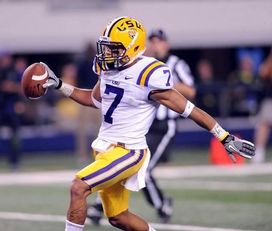 ICONTyronne Mathieu and the LSU Tigers opened as favorites, but the early money appears to be backing Alabama.

The marquee matchup between top-ranked LSU and No. 2 Alabama has already seen its fair share of movement. The Wynn sportsbook in Las Vegas opened the game at LSU -2.5 while the Hilton posted the Tigers at -1.5.

As of Monday evening, the Wynn had pulled the game off the board and the line had dropped to a pick ‘em at the Hilton, indicating the early money likes the Crimson Tide in the rematch.

Michigan opened -1 for their Sugar Bowl showdown with Virginia Tech, Oklahoma State was posted at -3 for their Fiesta Bowl date with Stanford, Oregon is currently -6 against Wisconsin in the Rose Bowl and Clemson—despite opening as a pick against West Virginia in the Orange Bowl—is now listed at -3.

The party gets started on December 17 at 2:00pm ET when the Temple Owls take on the Wyoming Cowboys in the Gildan New Mexico Bowl. Temple is currently posted as the favorite at -7.5.

Take a look, find your favorites (or underdogs) and let me know what you like in the comments section below.

*The favorite is listed in all caps.