Between the Michael Crabtree injury, losing Aubrayo Franklin to free agency and the abbreviated Frank Gore holdout, the San Francisco 49ers aren’t exactly off to the best of starts this season. 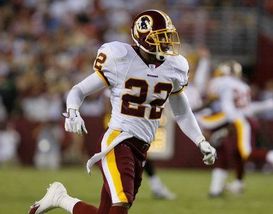 Carlos Rogers should start from Day 1 in San Francisco.

But things were looking up a bit Tuesday night as the 49ers reached an agreement on a one-year deal with free agent cornerback Carlos Rogers, per Matt Maiocco of CSN Bay Area.

Rogers—a 30-year-old out of Auburn who spent the first six seasons of his career with the Washington Redskins—was the ninth overall pick in the 2005 NFL draft. He made 68 starts and recorded eight interceptions during his time in Washington.

The move is bigger than it may appear for the 49ers, as the team was in desperate need of a starting cornerback after releasing veteran Nate Clements last week.