49ers still the favorite to win the 2013 Super Bowl

Whether it’s Alex Smith or Colin Kaepernick under center in the Bay Area, the bottom line in Las Vegas is that the 7-2-1 San Francisco 49ers are still the LVH SuperBook favorite to win the 2013 Super Bowl.

Coming off a thoroughly convincing beat down of the Chicago Bears on Monday night, San Francisco emerged on top of the odds board at 7-2 on Tuesday, followed immediately by the Houston Texans and New England Patriots at 9-2. Peyton Manning’s Denver Broncos, winners of five straight games, currently check in at 5-1.

Those looking for some late-season value may be interested in the Dallas Cowboys (30-1) or New Orleans Saints (30-1), as Jason Garrett’s 5-5 crew is just one game out of first place in the NFC East, while Drew Brees and company have ripped off five wins over their last six games and appear to be peaking at just the right time.

Here’s the complete rundown, courtesy of the LVH SuperBook: 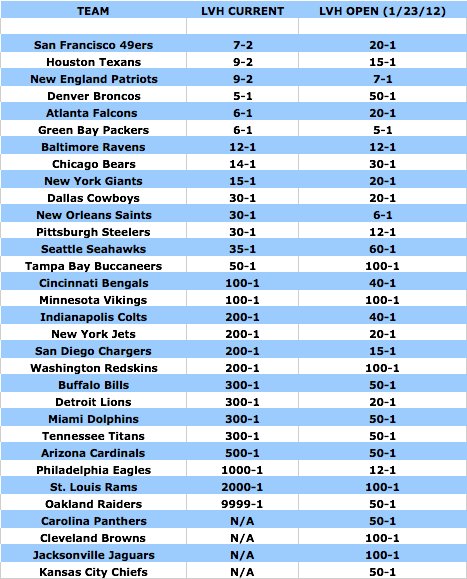