It’s easy to laugh and point a finger at Ryan Leaf. After all, the 35-year-old former Chargers quarterback has been arrested as many times since 2009 (three) as years he spent playing professional football.

But Leaf’s return to the headlines offers more than just an opportunity to roll your eyes or shake your head. With just over three weeks until the start of the 2012 NFL draft, Ryan Leaf’s most recent journey to rock bottom should serve as a cautionary tale to the hundreds of prospects set to embark on their NFL journeys.

Some of you may be too young to remember this, but there was once a time when Leaf was a highly regarded quarterback prospect out of Washington State. The 6-6, 240-pounder threw for 3,637 yards and 33 touchdowns for a 10-2 Cougars team that made it all the way to the 1998 Rose Bowl.

The sky was the limit. 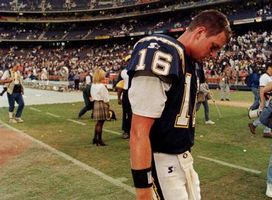 Leaf threw 33 interceptions and was sacked 53 times in 21 games with the Chargers.

Leaf entered the ’98 draft season equipped with a big-time arm and aspirations of being selected first overall by the Indianapolis Colts. But while fellow quarterback prospect Peyton Manning wound up in Indy, that didn’t stop some analysts and writers from declaring that Leaf was the better option of the two, much the way some are advocating this season on the behalf of Robert Griffin III over Andrew Luck.

It’s hard to believe now, but there was, in fact, a time when Ryan Leaf seemed destined for greatness.

Sadly, the ’98 Rose Bowl proved to be the pinnacle of Leaf’s career as he flamed out in San Diego after making just 18 starts over two seasons. Maturity issues, a nasty temper and the inability to protect the football were all contributing factors in Leaf’s quick departure from the NFL.

Three arrests and a drug addiction followed and now have the former first-round draft pick is staring down the barrel of a prison sentence.

The hope is that Ryan Leaf’s sad demise isn’t lost on this year’s crop of draft prospects gearing up to begin their professional careers. If there’s one thing the guys like Leaf, JaMarcus Russell and Charles Rogers have taught us it’s that nothing in this business is guaranteed. You may have fans, teams and the media fawning over you now, but the NFL draft isn’t the finish line. It’s merely the beginning of a new chapter in which the speed of the game is often outpaced by the speed of real life.

It’s far too late for Leaf the quarterback, but there’s still time for Leaf the human being to regain control of his life. If anything, his NFL legacy—coupled with the financial troubles recently encountered by defensive end Dwight Freeney—should arm the NFL agents who actually give a damn about their client’s best interests with enough ammunition to effectively demonstrate the variety of pitfalls any prospect is capable of encountering.

Hearing your name called by Commissioner Goodell on Thursday night during the first round of the NFL draft has to be exhilarating. But it doesn’t have to be the last time you experience the highs of what immeasurable talent and a strong work ethic can deliver. Earning the right to play in the NFL isn’t a lottery ticket. It’s a prestigious opportunity to make the most of what sets you apart from all the others.

Take it from Ryan Leaf