Which of the following wins was worth more:

The answer is a tie, as both victories were worth exactly one win. But if we were to rephrase the question and ask which win was more impressive, the result would bring an entirely different answer altogether. The Patriots came significantly short of covering the 11-point spread in the team’s three-point win over the 3-3 Jets, while the Jaguars posted a five-point victory as 10-point underdogs over the 4-1 Baltimore Ravens. Using the Las Vegas point spread as our key factor, Jacksonville’s win would be deemed more impressive.

Good teams win, great teams cover. That sentiment carries more weight in Sin City than anyplace else, as I’ve witnessed Giants fans storm out of sports books after winning by too little and Cardinals fans ordering rounds of celebratory shots after losing by just enough. In the southern Nevada desert, the Vegas line serves as the great equalizer.

The point spread is used primarily to balance the action a sports book receives on a given game, but it can also serve the function of handicapping matchups between two teams of different calibers. Slower horses are given higher odds, inferior football teams are given a larger point spread. In essence, the point spread helps to level the playing field.

So when all things are considered equal, which teams tend to excel when playing with the added benefit of home field advantage? Here’s a breakdown of how every NFL team fared at home against the point spread from 2008-2012.

SU: Straight-up
ATS: Against the spread
Avg. points above the spread: The amount of points, on average, in which the home team surpasses the point spread. EX: If Chicago is favored by 6 points and wins by 14, the Bears surpassed the spread by +8 points. 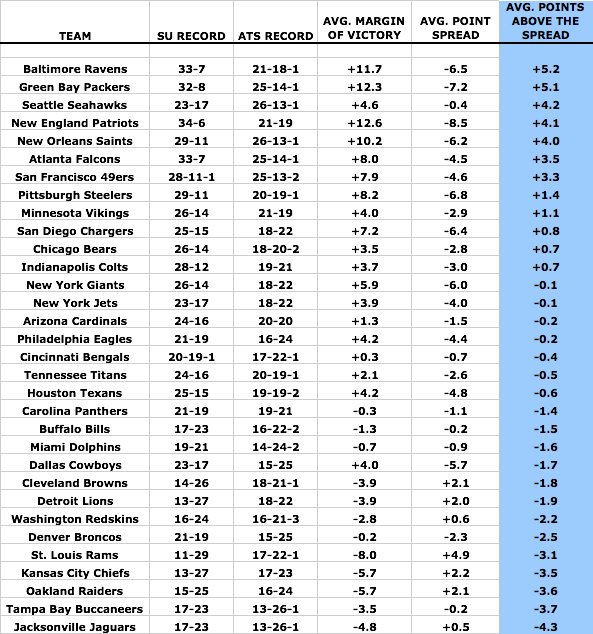 Laying $110 to win $100 on every home game played by each of the following five teams over the last five years would have resulted in a profit of: 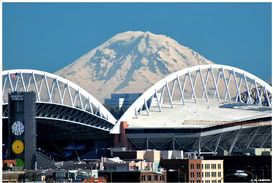 CenturyLink Field in Seattle is one of the toughest places in the league for opponents to come away victorious.

Seattle Seahawks (+$1,170): Long travel distances, inclement weather, the infamous 12th man. Nobody likes playing at CenturyLink Field. The Seahawks went 7-1 at home against the number last season, failing to cover only in the season-finale against St. Louis thanks, in large part, to an inflated line of -11.

While perhaps not the best indicator of profitability, average points above the spread or, “the blue column,” does demonstrate that the teams who routinely exceed the line set by Vegas bookmakers tend to experience an abundance of success while playing at home.

New England may be just two games over .500 at home in the ATS column over the last five years, but the Patriots have been asked to cover, on average, a larger point spread than any other team in the National Football League (-8.5). During that time span, New England has defeated the opposition by an average of 12.6 points per game (first in NFL), but Bill Belichick’s crew is still just 21-19 against the number.

However, despite the ridiculously high lines the Pats have faced on a weekly basis, the organization still ranks fourth in the league in average points above the spread at home (+4.1) and is a league-best 34-6 straight-up at Gillette Stadium since 2008. While the team’s ATS record would put the Pats more towards the middle of the pack if used as a home field advantage indicator, New England’s average points above the spread ranking demonstrates that the team does possess a significant home field advantage.

It’s fairly obvious to state that teams who exceed Vegas expectations will possess impressive home records. But in a league that’s supposed to feature more parity than any other professional sports enterprise, it’s worth mentioning that even after being given an average of 4.9 points against the spread per week (most in NFL), the St. Louis Rams are still just 17-22-1 ATS and 11-19 SU at home since 2008.

Even with extremely low expectations, teams like the Rams, Jaguars and Raiders still have trouble finding even minimal success while playing in their own stadiums, while organizations like Green Bay, Atlanta and San Francisco still fare exceptionally well against the great equalizer.