A sticky situation arises for the NCAA

It’s the day after the election. President Obama will remain in the White House, the Democrats maintained their control of the Senate and the Republicans are still running the show in the House. Fox News is despondent, CNN is elated.

And the NCAA awakes to find itself in a sticky icky situation.

Flying below the radar of Barack Obama’s Tuesday night victory over Mitt Romney were the passages of Amendment 64 in Colorado and Initiative 502 in Washington, two bills that legalize the personal use and sale of recreational marijuana. In essence, it is now permissible to smoke weed in Washington and Colorado, immediately christening the cities of Denver and Seattle as 2013 spring break hot spots.

But with great privilege comes great responsibility. And a big question the NCAA could be faced with in the near future is whether or not college football’s governing body can punish a collegiate athlete for doing something that the state says is perfectly acceptable.

Before we get ahead of ourselves, it’s important to note that the federal government may have something to say about what just went down in Colorado and Washington. Just because a state says it’s permissible to possess and smoke marijuana doesn’t mean the feds will sit back and allow it to happen. Legalizing pot on a state level still violates federal law.

But I think that many of us can already see how this situation could play out. If I’m a broke college student who needs money to buy a plane ticket for a family member’s funeral, and I happen to have a friend whose rich father is a booster of the football program, and said father is willing to float me some cash for the ticket, it’s not a problem.

If I happen to be a member of the football team, it’s a big no-no. 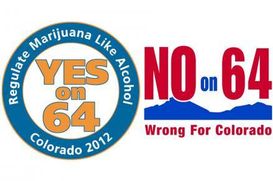 At the current moment, the NCAA oversees two drug tests for collegiate athletes. One of which is administered for championship events and bowl games, while the other is conducted year-round. But the principal reason for both tests is to deter and detect the use of performance-enhancing drugs, rather than determine which athletes are using marijuana. When it comes to pot, the NCAA pretty much leaves it up to each individual university to create a drug-free environment.

Pro-pot advocates in Colorado and Washington may be celebrating Tuesday night’s respective victories, but that doesn’t mean anything has changed for student-athletes. Don’t get me wrong, I’m all for the legalization of marijuana on a nationwide scale. Two of the most integral issues facing the candidates in this year’s presidential election dealt with improving our struggling economy and reducing the country’s unemployment rate—two quagmires that could be improved through the legalization of pot, which would create jobs in the agriculture and distribution industries while creating revenue through taxes.

And the way I see it, people who want to smoke weed are going to find a way to smoke weed. Marijuana causes less destruction and far fewer deaths in this country than alcohol, yet we can buy as much booze as we want the moment we reach 21-years of age. If people are going to smoke pot, we might as well find a way to make it benefit the country.

But student-athletes are, and will continue to be, held to a higher standard. This isn’t about whether or not the NCAA has the right to crack down on football players in Colorado and Washington for smoking pot when state law says it’s not a problem. It’s about that unspoken bond between teammates that acknowledges each player’s responsibility to prepare himself or herself to play at their absolute best. Smoking pot will not improve one’s performance on the field and thus, should be something all athletes abstain from doing. It’s not an issue for 22-year-old seniors to consume alcohol responsibly on a Friday night, but it’s a problem if that same senior has a football game the following afternoon.

It’s also not against the law in Nevada to place a wager on whether or not UNLV or the University of Nevada will cover the point spread on a given Saturday. But if a member of the Wolf Pack or Rebels walks into a Nevada sports book and throws down some cash on his respective team to lose, well, that’s going to create an issue.

Student-athletes are individuals who have been blessed with gifts that you and I will never know. These gifts open doors and create opportunities. By accepting an invitation to participate in collegiate sports, student-athletes are acknowledging a responsibility to both their school and their teammates. If they don’t want to accept the privileges and accountability that come with the invitation, they are absolutely free to decline.

Because with great privilege comes great responsibility. And the privileges that come with playing collegiate sports also include the responsibility of preparing to play at one’s absolute best.