Cantor Gaming recently released their point spreads for the 240 NFL games played from Week 1 through Week 16 of the 2013 season. That means if you’re feeling an itch and are currently located within the boarders of the great state of Nevada, you are more than welcome to fire away on the much anticipated Week 10 matchup between the Jacksonville Jaguars and Tennessee Titans.

All of Cantor’s lines are listed below along with a team-by-team breakdown that shows how many times each franchise is listed as a favorite, underdog or pick ‘em.

Keep an eye on the following…

1. The Jacksonville Jaguars and Arizona Cardinals are the only teams that are never listed as a favorite.

2. The New England Patriots are the only team that is never posted as an underdog.

4. The Denver Broncos are not listed as an underdog until Week 12, when they travel to New England to play the Patriots (+1.5).

6. Cantor Gaming—as well as the rest of Las Vegas—is well aware of the public’s intention to back the Seahawks in 2013. Seattle is listed as a favorite 13 times (tied for league high) and is currently posted on the board at -1 for their Week 4 road trip to Houston and Week 15 road date against the New York Giants. As if those numbers weren’t curious enough, the Seahawks at Falcons showdown in Week 10 is currently posted as a pick ‘em. 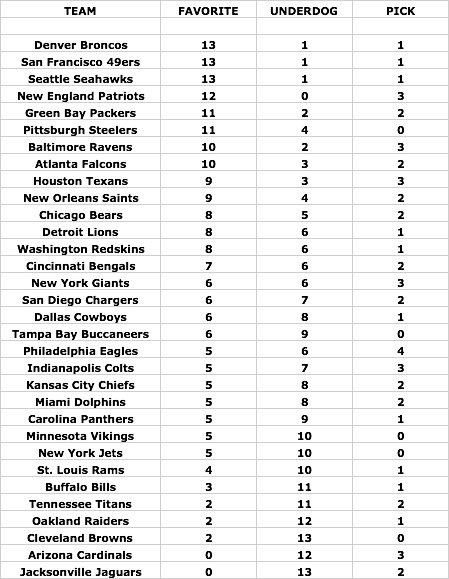 No lines available at this time.